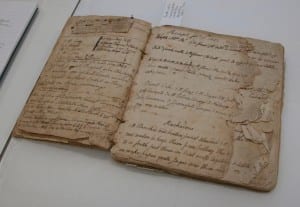 In all, there are 13 receipt books and numerous clippings and recipe fragments (in both manuscript and printed form) dating from the mid-eighteenth century through the early 20th century. The receipt books belonged to members of the Cherry Hill household.

The two oldest books are believed to have belonged to Maria Van Rensselaer (1749-1830), Cherry Hill’s first mistress, and her daughter, Arriet Van Rensselaer (1775-1840); the remaining eleven were compiled by subsequent generations of the family and household.  The receipt book believed to be Maria’s contains what may be the oldest surviving Dutch-American cookie recipe and is remarkably revealing of Dutch culinary survivals and adaptations in the New World.

Arriet’s receipt book and associated butter- and cheese-making accounts document the operations of an affluent but semi-rural turn-of-the 19th-century household.  In all, the recipe collections evince a cross-generational continuity while also revealing structural change in household economies.

While the collection as a whole is significant, the two oldest receipt books are most significant, most sought after by researchers, and in the worst condition.    Scholars more regularly request to study the early receipt books, including the noted food historian, Peter Rose—and in each case, access to the books must be weighed against assuring their long-term preservation.

“This $5,140 project is consistent with HCH’s mission—providing access to one Albany family’s rich historical resources—and with the museum’s vision and strategic goals,” Cherry Hill Curator Deborah Emmons-Andarawis said in a statement issued to the press.  “Through its National Endowment for the Humanities-funded Telling a Bigger Story campaign, HCH aims to transform into a nationally recognized research center—and the museum’s significant, intact family collection is the key to that vision.”

Until the Edward Frisbee Center for Collections & Research was built in 2003, access to the collection was extremely limited due to the space constraints of the historic house, where all collections were stored.  Since the center opened, HCH has been working to improve both physical and intellectual access to its collections—and the museum’s great strides are clearly evident in the fact that a collections-based graduate-level course is taught onsite.

Currently, an IMLS-funded project is underway that will (among other things) upgrade the collections database and pave the way for online access to digitized collections.  The much sought-after receipt books, once digitized, will be among the first electronically accessible collections.