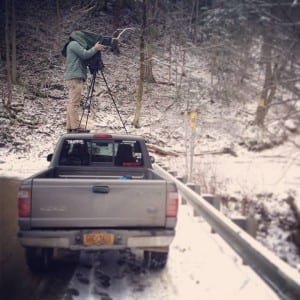 Whether it’s love for a printed-on-real-paper tangible object, a longing for the time when saying you were a photographer meant you had arcane training and chemistry skills, or a lust to accumulate gear, the movement to recreate daguerreotypes, tintypes, ambrotypes and other obscure 19th century processes is well underway. The popularity of the contemporary photographic antiquarians who embrace the old methods is documented in a 2011 film aptly called, “Artists and Alchemists.” 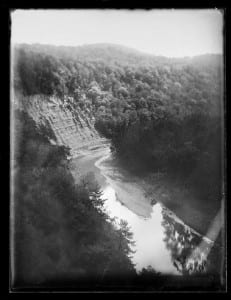 George Eastman House International Museum of Photography and Film in Rochester, NY is ground zero for the movement, offering over a score of workshops to those interested in safely learning these exacting and time-consuming historic processes which often make use of chemicals that can emit poison or explode.

Nick Brandreth, 27, who worked for a year as an unpaid intern at Eastman House, studying with photographic process historian Mark Osterman, initiated a Kickstarter campaign in October to fund a new project. Titled, Upstate, the project will document the landscapes in the areas of New York where hydrofracking has been proposed or is already taking place. Traveling with a bulky large format camera, he will expose painstakingly hand made gelatin emulsion plates to create negatives which will be used later to make salt and carbon prints.

Landscape photography is well suited to the old techniques because many require long exposure times, but Brandreth is adding a twist. While at each site, he collects soil samples. Soil contains the broken down remains of plant matter—carbon—the same stuff that rots to create the methane that energy companies are after when they frack. With these handfuls of dirt, Brandreth makes the ink that is used to make carbon tissue prints from his negatives.

The pigment made from soil is imbedded and inextricably connected to the prints he makes of the depicted contested landscapes from which the soil comes. Just as antiquarian photography seeks to capture something gone in the face of modern digital technology, Brandreth documents a rural landscape also about to be changed forever by the voracious modern necessity of ever more energy to power our digital lives.

Brandreth wants people to realize that there are beautiful places in New York State that are threatened by hydrofracking. “This is my ode to the land,” he says, adding that he wants to “tell a story about a place – people and the places need to be protected.” Of fracking, he says, “The initial capital gain is a stark contrast to a painful crash that renders an area worse off than it was before. Economics and damage to the soil aside, fracking also affects well water and consequently animal and, ultimately, human life. With this project I hope to join the ranks of concerned citizens who are taking a stand to help protect our natural resources and the people of New York State.” 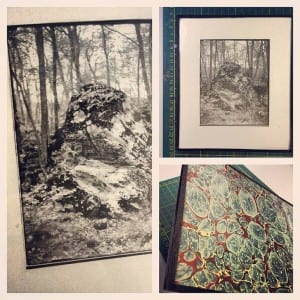 Each weekend since October, he’s packed his delicate prepared gelatin plates and a 1910 large format wooden camera along with a couple of other circa 1940 cameras and travels across New York State, mostly in the “Utica Shale” region. Some weekends he comes away with only one or two plates (negatives) and the soil samples from which he’ll make the carbon prints in a darkroom.

He plans to continue his peregrinations across the state through Spring with hopes to come up with 40-50 images. In conjunction with a gallery show planned for the Summer of 2014, Brandreth will also create a limited edition, hand made book of images.