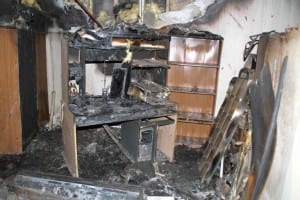 On Tuesday night, January 7, 2014 about 10:30 pm a fire broke out in the Kanisteo Historical Society in Canisteo, Steuben County, on main street.

The building is only feet from the Canisteo Volunteer Fire Department, who were able to stop the fire and save most of the artifacts and holdings.

A large fire-resistant safe was only recently installed, which protected the most valuable holdings.  “The dial on the safe was melted so we haven’t been able to get inside yet, but the safe was fireproof, so we believe that our most valuable items are safe,” Historical Society President George Dickey told reporters. “The glass cases and bookcases that protect the displays also worked well against the fire.” The building’s contents were also heavily insured. 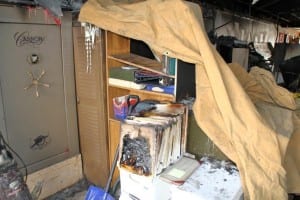 “There was structural damage to the building, but everything is repairable,” Steuben County Fire Investigator Joe Gerych told The Evening Tribune. “They were actually able to salvage a lot of irreplaceable historical artifacts.”

The morning after the fire volunteers began transporting the damaged materials to a nearby empty house for evaluation and conservation.  Historical Society officials expect the cleaning process to be extensive and are seeking additional volunteer help.