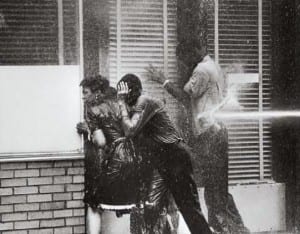 Created Equal: America’s Civil Rights Struggle is an initiative of the National Endowment for the Humanities (NEH), as part of its Bridging Cultures initiative, in partnership with the Gilder Lehrman Institute of American History. Created Equal uses the power of documentary films to encourage community discussion of America’s civil rights history. NEH has partnered with the Gilder Lehrman Institute of American History to develop programmatic and support materials.
The Schenectady County Historical Society is one of 473 institutions across the country awarded a set of four films chronicling the history of the civil rights movement. The powerful documentaries The Abolitionists, Slavery by Another Name, The Loving Story, and Freedom Riders include dramatic scenes of incidents in the 150-year effort to achieve equal rights for all. Freedom Riders and The Loving Story won Emmys in 2012 and 2013, respectively, and The Abolitionists was a 2013 Emmy nominee.

Each of the films in the Created Equal series was produced with NEH support, and each tells remarkable stories of individuals who challenged the social and legal status quo of deeply rooted institutions, from slavery to segregation. Created Equal programs bring communities together to revisit our shared history and help bridge deep racial and cultural divides in American civic life. Visit www.neh.gov/created-equal for more information.

The Schenectady County Historical Society will feature conversations/discussions about the themes suggested in these historic films. Local scholars will introduce the films, and after the screenings, will facilitate discussion about the themes touched upon in the documentaries.

The schedule of the film and discussion series is as follows: