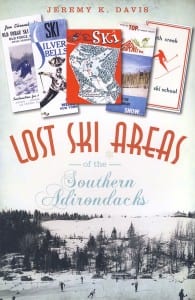 From snowmobiles to Iroquois culture, from North Creek to Old Forge, the Adirondack Museum’s “Cabin Fever Sundays” series will present a wide-ranging look at life in the Adirondacks – yesterday, today, and tomorrow.

The series kicks off with “Lost Ski Areas of the Southern Adirondacks,” featuring speaker Jeremy Davis, at 1:30 p.m. on Sunday, January 5, at View, on Route 28 in Old Forge, NY. Admission is free for museum members, students, and children; $5 for non-members.

Davis will share the history of how ski areas in the region developed during the 1930s and tell the stories of some now-vanished slopes such as Harvey Mountain/Garnet Mountain in North River, Maple Ridge in Old Forge, Silver Bells in Wells, and more, with photographs and memories from those who enjoyed them.

Future installments in the Cabin Fever lecture series will include:

January 19: “Stump the Staff: Strange Stories from the Adirondacks” with Hallie Bond, Jerry Pepper, and Phil Terrie. Bring in an artifact, see if museum experts can guess what it is, and find out some of the stories behind the strangest museum objects they’ve encountered.

February 16: “Adirondack Snowmobile History” with New York History Blog editor John Warren. Discover the history of snow machines in the Adirondacks from the early 1900s through modern personal vehicles. This event is part of the 29th Annual Indian Lake Winterfest and its new SNOCADE snowmobile extravaganza.

February 23: “Winter Bird Visitors to Northern New York” with Joan Collins. Find out why the birds move to our region, learn where you can find them, hear vocalizations of 19 species, and more.

March 2: “The Iroquois Influence on Women’s Rights” with Sally Roesch Wagner. Explore a society in which women chose and removed all political representatives and the effect it had on the 19th century women’s rights movement. This program is made possible with support from the “Speakers in the Humanities” of the New York Council for the Humanities with the support of the National Endowment for the Humanities.

March 30: “Feet, Hooves, and Rails: Transportation in Nineteenth Century America” with J. Ward Regan. Take a tour through the development of transportation over time, from the pre-industrial period to canals and railroads to today’s automobiles. This program is made possible with support from the “Speakers in the Humanities” of the New York Council for the Humanities with the support of the National Endowment for the Humanities.

A complete description of all the “Cabin Fever Sundays” programs, locations, times and costs, can be found at the Adirondack Museum’s website.