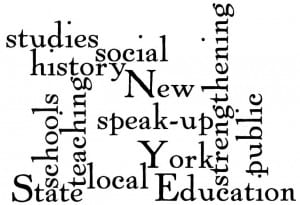 This was developed in 2012 and was discussed here on the blog then. It apparently has been in draft form for over a year.

Grade 4 and Grades 7-8 are the ones relevant to New York history.

Grade 4 (pp. 48-55) covers “Local History and Local Government.” “Local” means county, city, town and village, but there is really no local history here. Sections 4.5-4.10 cover “History of the United States and New York” but historical coverage seems to stop after the Revolution. There are some general historical themes for the period after that but no historical account of the 19th, 20th, or early 21st centuries.

Grades 7 and 8 (pp.72-85), Sections 7.1 – 8.16, are entitled “The United States and New York History.” U.S. history is covered. But New York is almost entirely absent. For instance, the U.S. Constitution is described, but the New York State Constitution is not.

There is a unit on the Civil War, but no indication that New York furnished more soldiers, financial support, and war materiel, and sustained more casualties than any other state.

The national civil rights movement is covered, but the guidelines do not note, for instance, that the NAACP was founded in New York in 1909 or that New York enacted the first state civil rights law in 1945.

The guidelines don’t explain New York’s historical leadership and preeminence in such fields as business, finance and banking.

It isn’t clear from the website what the next steps are for this draft document. But as it was being developed, a national group was working on national Common Core standards for social studies, which had not existed before. Their document was issued in June, entitled College, Career, and Civic Life (C3) Framework for Social Studies State Standards (http://www.socialstudies.org/system/files/c3/C3-Framework-for-Social-Studies.pdf). The document is sub-titled “Guidance for Enhancing the Rigor of K-12 Civics, Economics, Geography and History.” The development group included the American Historical Association but not the Organization of American Historians or the American Association of State and Local History.

History is discussed in six pages (45-50) of this 107-page document. There is discussion there of historical thinking, change, continuity, historical perspectives, context and evidence, and causation and argument. But there is nothing about historical content or state and local history.
It isn’t clear how, if at all, this new national standard will impact the draft New York standard.

New York state and local history is not faring well in these Common Core social studies standards.
New York State students should have the opportunity to learn the history of their own state in New York schools.