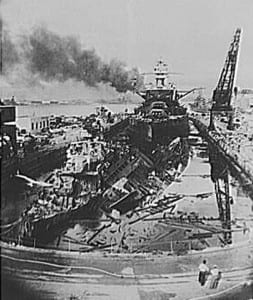 The anniversary of the Battle of Plattsburgh passed recently (it was fought September 11, 1814), and this week, the anniversary of another famous American battle is noted: the attack on Pearl Harbor, December 7, 1941. Within the military, both engagements are held in the highest regard as critical moments in American history, and oddly enough, the two have an unusual link of sorts.

I discovered this several years ago while working on one of my earlier publications, The Battle of Plattsburgh Question & Answer Book. What I found was not earth-shattering stuff, but instead more of an “I’ll be darned!” moment that happened during research.

The book’s unusual format led to several similar discoveries. The idea was to cover the entire story of Plattsburgh’s famous battle, but in a way that might be enjoyed by children as well as adults. When my children were young, I often made a game of things to keep their minds active and teach them while they didn’t realize they were being taught.

The best way was trivia-style games. Whether sitting in the car and waiting for someone; driving somewhere; working in the garden; building our baseball field; or any other activity, I would assume a sort of Alex Trebek role and fire questions off for anyone to answer. If the radio was on, it was, Who wrote that song? Who sings it? What’s the title? I played along as well, and it was always fun. We had lots of laughs during those times of constructive play.

I employed that format in the book, making it educational as well as useful for question-and-answer games, which also made it perfectly suited for families. To ensure that even the moderator could play along, the numbered questions are on the left-side pages and the matching-numbered answers are on the right-side pages. That way, you can’t peripherally see part of the answer while reading the question, so you can both moderate and participate.

To meet the book’s goal, it was necessary to know lots of facts related to the battle, and to make it fun, it was best to find unusual bits of information. In digging ever deeper, I found my way to the above-mentioned “I’ll be darned!” moment.

Among the honors bestowed upon military men of high repute is having ships named after them. In tracking the future of high-profile participants in the Battle of Plattsburgh, I found that at least 18 naval vessels were named after the men who served in Commodore Thomas Macdonough’s fleet. There are many interesting side stories involved, but I’ll focus here on the link between Plattsburgh and Pearl Harbor.

Among the other American vessels supporting the Saratoga, Ticonderoga, and Eagle were the Allen, Aylwin, Ballard, Montgomery, and Preble, all named by Macdonough in honor of noted naval officers.

In nearly two centuries since the confrontation on Plattsburgh Bay, five ships have been named after Thomas Macdonough. His men cited above―Cassin, Henley, and Gamble―were also honored with the naming of one or more ships.

To honor Macdonough’s other vessels at Plattsburgh and further honor the men they were named for―William Henry Allen, John Cushing Aylwin, Edward J. Ballard, Richard Montgomery, and Edward Preble―the navy applied their surnames to one or more additional ships.

The navy has named more than 15,000 ships over the years, and of that total, 101 vessels were present when the Japanese attacked Pearl Harbor. Taking those numbers into account, it seemed unlikely to me that nine names tied directly to the Battle of Plattsburgh also graced ships based at Pearl Harbor on the Day of Infamy.

But that’s what happened with the USS Allen, Aylwin, Ballard, Cassin, Gamble, Henley, Macdonough, Montgomery, and Preble. With the exception of the Ballard, which was not in port that day, they were all on site when the Pearl Harbor attack took place. Some survived unscathed, while others suffered varying degrees of damage.

Like I said, not exactly earth shattering, but certainly interesting.

Photo: The jumbled mass of wreckage in the foreground of dry-dock number one are the U.S. destroyers Downes (left) and Cassin (right). The battleship in the rear is the USS Pennsylvania. (Library of Congress).