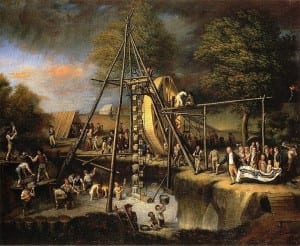 Tectonic forces and global cooling and warming set the stage for the dawn of New York State history. The stage was not a barren one and long before King Kong climbed the Empire State Building that scrapped the sky, giants walked the ground that would become the Empire State. These giants would be called “mastodons” and they became important in religion and nationalism in ways that before their discovery no one could have imagined.

The story of mastodons and New York begins in 1705 in Claverack, Columbia County. A Dutch tenant farmer picked up a five-pound tooth that had rolled down a hill and landed at his feet. Being a sensible sort of person, he naturally traded the tooth to a politician for a glass of rum. The tooth thereupon made its way up the political food chain until it arrived in London.

The unknown species or “incognitum” delivered a profound and disturbing message to believers and non-believers alike on both sides of the Atlantic. According to the King James Version, “There were giants in the earth in those days”(Gen. 6:4) in the time before the Flood. It appeared as if the New York discovery was proof of the validity of that claim.

But the glorious proof became a weapon of assault. The tooth was not from a human after all so it did not prove the validity of the biblical verse. Plus whatever the animal, named “mastodon” in 1806, was, it was extinct. It no longer roamed the land. That meant it had not been saved in Noah’s ark even though all the creatures of the earth were supposed to have been preserved. This mean that a creature created by the Lord no longer existed. In today’s world of conservation and seeking to save species, it is difficult to fathom the magnitude of the paradigm shift from the view of a Peaceable Kingdom to one of strum und drang in the natural world where animals could cease to exist. The idea that God had not created a perfect world since animals could become extinct was a shocking one but the evidence from New York and then elsewhere was clear.

A corollary to this development was the perennial inferiority complex in the United States to the vaunted civilizations from hoary antiquity in Europe. This complex manifested itself in the assertion by Georges-Louis Leclerc, Comte de Buffon, that the species of the New World were inferior to those of the Old. Size mattered and our animals were smaller than their animals. Later Georges Cuvier picked up the mantle aided in part by the fossils found in Paris during its rebuilding after the French Revolution began. The judgement of the Old World was clear and definitive: the species of the New World were degenerate.

Thomas Jefferson, a strapping six-footer as was George Washington, took exception to these pronouncements from France. He believed that such large beasts as the mastodons still lived in the interior of the continent. American animals were not degenerate! Some large bones had been uncovered by British troops north of New York during the American Revolution. The first mastodon remains of Orange County were found in 1780 which George Washington viewed while encamped in Newburgh. He subsequently obtained a mastodon tooth. There also were stories of sightings in the interior. One of the tasks of the Lewis and Clark expedition was to find proof, living and/or fossil, of the superior size of the American animal.

Jefferson was further encouraged in this belief by events in Orange County. By 1801, additional mastodon discoveries had occurred and then one did near Newburgh on the farm of John Masten. Charles Wilson Peale led the excavations which he portrayed in paint years later in “Exhuming the Mammoth.” (Like “Washington Crossing the Delaware,” the painted event was of a real historic event just not exactly as depicted..) The mastodon was reconstructed at Peale’s museum in Philadelphia, still the cultural capital of America. With the painting and museum by a showman before Barnum but dealing with the real objects, mastodons became one of the crazes that periodically ripples through human society. Although they later were eclipsed by the even bigger dinosaurs, New York’s mastodons left their impact on the American culture. Now we had concrete proof, or at least fossilized proof, that giant animals had walked America and there was no need to feel the American environment produced inferior species.

So the next time you are gazing upon the mastodons of New York at the New York State Museum, Museum Village in Monroe, Orange County, or the Yale Peabody Museum consider their full story and meaning for America.

1. Animals could become extinct. The world had not been created perfect.
2. America struggled with its inferiority complex with Europe.
3. Philadelphia was still the cultural capital of the United States.

Soon Thomas Cole would move from Philadelphia to New York, create the Hudson River Art school, and paint the world as God had created it; soon people would understand the mechanism of the glaciers and the geology of the planet; and soon New York would become the Empire State. But for now in the waning decades of the 18th century and the dawn of the 19th, giant extinct mastodons from the prehistoric Ice Ages first enabled Americans to stand tall even as they undermined the Bible.

For additional information about New York’s mastodons, readers are invited to read

P.S. The story continued in 2000 with the Hyde Park mastodon discovered by Larry Lozier when dredging his pond, excavated by archaeologist Chris Lindner, Bard College, who once spoke to teachers as part of an IHARE Teacherhostel but not about that, and the Paleontological Research Institution in Ithaca.

Illustration: Peale’s 1806 painting, “The Exhumation of the Mastadon”.