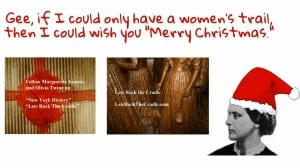 When we visited the national park in Seneca Falls, NY this year we asked Noemi “Ami” Ghazala, superintendent of the Women’s Rights National Historical Park, about the significance of the feds reaching the “stakeholder” phase in the Votes for Women trail process. “We really don’t know what it means,” she said. “The criteria may sit there for a short time or remain there for years.”

This was alarming enough. Then we checked into the statistical probability of Congressional approval for funding the Votes for Women federal trail in the Finger Lakes region. We consulted the tracking web site for Congress and stumbled on the prediction that we might find coal in our stockings this year if we’re expecting a reauthorization of a bill that includes a Votes for Women federal trail. This is complicated by the fact that federal funding must be delivered separately.

The fate of H.R. 2763, for example, to reauthorize the National Women’s Rights History Project Act (sponsored by Louise Slaughter D-NY-25 and others) is uncertain. The bill was assigned to a congressional committee on July 19, 2013. The online prognosis gives it an 11 percent chance of getting past the committee stage and only a one percent chance of being enacted. Funding is a considerable challenge in order to make significant progress before the end of the federal fiscal year.

The passage and funding of these two trail proposals (the federal and state) should play a key part in a strategic effort (not currently in place) to prepare for the 2017 and 2020 suffrage centennials. But political considerations, not logic, appear to be running the show. The federal heritage trail, for example, is more than road signs and leaflets. Such an investment by taxpayer money would provide formal recognition to an upstate region that without additional support is groaning under the current economic conditions.

At present, several local historical societies in the Cradle of Womens Rights either have or are considering closing their doors, and layoffs may be in the future at significant historical sites. The federal women’s trail proposal includes money for those who would like to launch businesses related to the Cradle theme. Book stores, artists and performers interested in interpretation programs, restaurants, tea houses, and similar ideas, once developed as small businesses and promoted by way of an overall plan, can only nourish and build an emerging tourist destination, as well as enhance and deepen public interest and understanding in a significant part of American history.

The prospect of the Harriet Tubman home in Auburn, NY becoming a national park is no pie in the sky prospect. Such a proposal is already under consideration by the U.S. Congress. And those in the know in other parts of NYS, including New York City, are taking a serious look at the opportunities inherent in the 2017 and 2020 suffrage centennials. 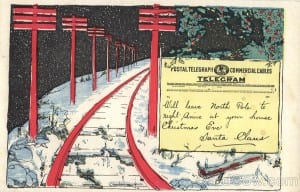 An assessment from Congresswoman Louise Slaughter

Cheri Hoffman, legislative director for Congresswoman Louise M. Slaughter, says the congresswoman from Syracuse, NY is hopeful for the reauthorization of the National Women’s Rights History Act in 2014, as it has “bipartisan support and should be non-controversial.” Slaughter’s office staff is currently working to add cosponsors to the bill and is collaborating with staff on the Natural Resources Committee that has jurisdiction over this bill.

“However, it should be noted that reauthorization alone, while necessary, does not provide any funding for the projects supported by the bill. A separate appropriation is necessary for that, and given the current fiscal climate in Congress, it is unlikely that we will see progress on funding the Votes for Women Trail this year,” Hoffman said.

Hoffman points out that the bill is important because “many properties central to the women’s rights movement remain undocumented, are unrecognized, or are not properly cared for. This is not just about ‘remembering our heroes of the past’ but about ensuring that future generations understand how valuable the rights are that women have because that was not always the case.” See the federal trail’s feasibility study for more information highlighting issues relative to the project.

“The information for the criteria for the Votes for Women trail will be released very soon, probably within a month,” according to Noemi “Ami” Ghazala, the superintendent of the Women’s Rights National Historic Park in Seneca Falls. NY. “It’s taken about a year for us to get to this point. The National Park Service put out a call for input. We interviewed about a dozen local historians and representatives of the Gage house, the Susan B. Anthony House, and several other historic sites.

“There is no further funding for the Trail, and there won’t be until Congress does something. Reauthorizing the bill won’t fund it. I felt it prudent to advise the public that the National Park Service is not moving forward now because there is no funding. We (the NPS) can’t in any way influence Congress. The public can play that role. I’m certainly optimistic that funding will be obtained sometime in the future because I think people care about the trail.”

While the proposal for the federal trail, located in the east to west Finger Lakes corridor, has moved through many hoops, work to enhance and promote a state women’s heritage trail consisting of sites throughout New York will need serious attention during the 2014 state legislative session.

Notes NYS Senator Betty Little (45th Senate District): “My vision for the state trail is more robust attention. It’s timely to do so, given the upcoming centennial celebrations of women’s suffrage in New York and then nationally. The issue with all of these kinds of initiatives is funding, but I’m hoping the media and public will see the benefit in dedicating some more resources for promotion and support.

“Although information about the state trail can be found on the New York Parks and Recreation web site, added exposure on the I LOVE NY web site, as well as utilizing social media, would bring more attention to the trail and all it offers.

“Passage earlier this year of legislative resolutions celebrating the 100th anniversary of the ‘Spirit of 1776’ wagon to commemorate the women’s suffrage movement was a great first step. This upcoming session we’ll be engaging colleagues and the administration to talk about plans to prepare for the centennial celebrations.”


“I’m sorry to say that, in my view, it would take a miracle for federal funding to come through for the Votes for Women Trail,” says Pam Elam, Board Member, National Collaborative for Women’s History Sites and Co-Chair of the NCWHS Women’s Heritage Trails Committee.

“Certainly, we can all continue to lobby for it and hope for the best, but it’s important to be realistic. Until the Democrats regain control of the House of Representatives, it is highly unlikely that anything positive is going to happen on the issues we care about.  Therefore, in the interim, I suggest that we concentrate on working together to organize for two extraordinary upcoming New York State anniversaries: (1) the 200th anniversary of Elizabeth Cady Stanton’s birth in 2015; and (2) New York’s 2017 woman suffrage centennial. Raising awareness regarding these two important events would also give us a way of highlighting other women’s history-related needs in New York State like the creation of more women’s heritage trails and the preservation of women’s history sites.

“We must make the Governor and other state leaders understand not only the historical importance of these anniversaries, but the great boon they could be to NYS tourism and the vital part our state’s woman suffrage centennial could play in boosting interest in national celebrations of the ratification of the 19th Amendment to the United States Constitution in 2020. It would also be a way of demonstrating New York’s commitment to completing women’s journey toward equality.”

Miracles are possible, which is why we’ve raised the issue of women’s trails that could make a significant difference in creating an awareness of an emerging tourism industry that could bring millions of dollars to New York. We stretched the limits by asking Santa to squeeze the federal and state women’s heritage trails into his sleigh this Christmas. Now, let’s see what happens next.