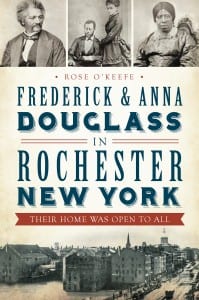 Many books have been written about Frederick Douglass’ early life and later accomplishments as a famous abolitionist and orator, but Frederick and Anna Douglass in Rochester New York: Their Home Was Open To All (History Press, 2013), by local historian Rose O’Keefe, is the first book to bring Frederick and Anna’s family side to life. O’Keefe traces the Douglass family’s journey to the rural homestead in what is now the edge of Highland Park in the City of Rochester.

Frederick Douglass – author, orator and former slave – spent twenty-five years with his family in Rochester beginning in 1848. Despite living through some of our nation’s most bitter and terrifying times, Frederick and his wife, Anna, raised five children in a loving home with flower, fruit and vegetable gardens.

While Frederick traveled widely, fighting for the freedom and rights of his brethren, Anna cared for their home and their family and extended circle. Their house was open to fugitives on the Underground Railroad, visiting abolitionists and house guests who stayed for weeks, months and years at a time. Local author Rose O’Keefe weaves together the story of the Douglasses’ experience in Rochester and the indelible mark they left on the Flower City.

Rose O’Keefe is a writer, editor, author and speaker. She is a member of Whistle Stop Writers, Rochester Association of Children’s Writers & Illustrators, Friends of Ganondagan, Business Association of the South Wedge Area, South Wedge Planning Committee and Friends of the Public Library. She is the author of three books about local history: Historic Genesee Country, Southeast Rochester and Rochester’s South Wedge. As a thirty-year resident of the South Wedge, she wanted to learn more about her “neighbors”, the Douglass family.

“Researching this book showed me that the struggles and joys the Douglass family had are very much like those of families today,” O’Keefe said, “Frederick Douglass once said: ‘There is no division of races. God Almighty made but one race. . . . You may say that Frederick Douglass considers himself a member of the once race which exists.’ I long for the time when all peoples see themselves as humans first.”