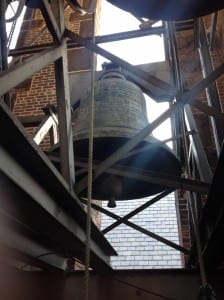 Bells ringing from a forest of steeples, horseshoes striking cobblestones, boat whistles in the harbor, Yiddische mamas scolding children from tenement windows. These are instantly recognizable noises that evoke a historical time and place, adding up to what today’s historians sometimes call a “soundscape.”

In today’s cities when the most characteristic sound may be the giant crash of falling brick walls as old buildings are demolished, soundscapes are a precious way of experiencing history outdoors. This heritage is particularly relevant in urban settings where so many layers of the city have gone missing.

The 1887 church of St. Martin’s in Harlem has a 42 bell carillon and three large chiming bells in its imposing bell tower. The landmarked Romanesque Revival church is trying to restore the bell tower, so the bells can ring again over Harlem. Currently the need for structural repairs is urgent because a bell weighing as much as 2,500 pounds, needs powerful bracing when rung. The bells in the tower traveled from the Van Bergen foundry in the Netherlands in 1949, and the carillon is the second largest in the United States, after Riverside Church (which has 74 bells). 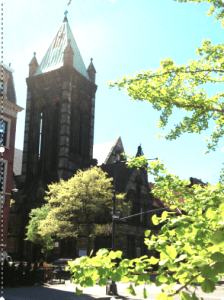 St. Martin’s Raise the Roof campaign is tackling the bell tower issues first, in a phased restoration effort that will allow the handsome structure at the corner of West 122nd St. and Malcolm X Boulevard regain a central place in the life of the community. And that community might well be defined by the reach of those magnificent bells.

In an anthology called Hearing History, editor Mark M. Smith talks of how sound shapes spatial experiences and contributes to people’s sense of identity. The range of a bell’s sound defined a parish, but in Western history, bell ringing meshed religious and secular purposes. When a king or duke passed through, peals of honor were rung, and daily ringing was prescribed for weeks at a time after the death of a local notable. Writing of France, Alain Corbin observed “The emotional impact of a bell helped create a territorial identity for individuals always living in range of its sound.” In the American context, church bells were rung for moments of secular celebration, including the Fourth of July, and New Year’s. And what school child could forget Paul Revere’s use of the bell tower in the Old North Church to hang a lantern warning of the British coming “one if by land, two if by sea.” Church bells were rung to warn of invasions, fires and floods, serving the community long past medieval times when ringing was thought to drive out demons or stop a line of thunderstorms.

As churches in urban areas have smaller congregations they have been rethinking their mission of service to the community. St. Martin’s, an Episcopal church is part of this trend, and has a program Art in Sacred Spaces that hosts the Forces of Nature Dance Company. And this spring the Harlem Biennale is also taking up residence there, a convenient base near the Richard Rodgers Amphitheater a block away in Marcus Garvey Park where both organizations present free performances in the summer. The church is close enough to the park to be very convenient for the arts organizations working on productions presented outdoors. 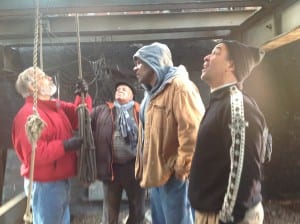 Valerie Daly head of the Raise the Roof campaign says the support group wants to raise funds to do restoration work in phases, starting with the bell tower. On a chilly weekend in December the Rev. Johan Johnson and some community volunteers climbed up the belfry to check the bell ropes. Greg Carey, a member of the Mount Morris Park Community Improvement Association, had offered to help fix the frayed and rotting ropes. An experienced bell ringer, Tony Furnivall from Trinity Church on Wall St. came to inspect conditions and give the bells a trial pull. Furnivall whose experience ringing goes back to his student days in England offered helpful advice. And he described how he had recruited downtown high school students to Trinity church to learn bell-ringing that qualified for a gym credit. This was truly an intriguing way of integrating ancient arts with current community needs and a mission to revitalize old church functions. Furnivall kept up his teen ringing for the whole year, and gained a small cohort of experienced students who could help train some in-coming students when some seniors moved on in June. 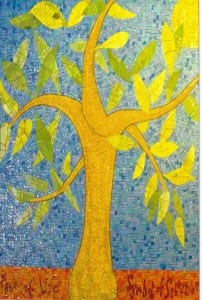 Other phases of the St. Martin’s include work on the handsomely decorated interior which has leaded stained glass windows separating rooms in the parish hall and stained glass exterior windows. A notable feature in several places is mosaic work, including floors, and a mosaic panel based on El Greco’s “Cleansing of the Temple.” The most remarkable little known work hidden away at St. Martin’s church is The Tree of life: SYmbol of Salvation” a mosaic by Romare Bearden. His father and mother belonged to the congregation, where he was a member, although not an active one according to his oral history from 1968 in the Archives of American Art. The stunning colors, simplified forms and radiance of the work mark it immediately as part of the Bearden oeuvre. In the 1940s and early 1950s, Bearden’s studio was nearby on 125th St., and he was an influential member of the Harlem arts community, and one of the founders of the Studio Museum of Harlem. He too lived within the sound of St. Martin’s bells in those years– imagine the swirling leaves in his Tree of Life mosaic dancing to the vibrations of the great bells, and the eye and ear of a moment sacred and secular will come rushing back.