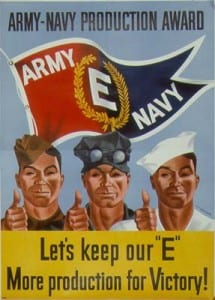 Sarah Jones will present and discuss her National History Day website, “‘The City that Kept a Secret’: How ALCO’s M7 Turned the Tide in North Africa” on Saturday, January 11, 2014 at 2:00 p.m.at the Schenectady County Historical Society in Schenectady.

ALCO was an important producer of locomotives and tanks for the war. During the first four years of the war, ALCO produced more product than it had in the first twenty-five years of the 20th century. In 1940, the Schenectady plant received a contract to build medium tanks and the company become the first to produce a satisfactory M3 “General Lee” for the army.

Sarah Jones is a 10th grader attending Guilderland High School. For the past three years, she has participated in the National History Day program. This past January, she was chosen as the student scholar representing New York State at the dedication ceremony for the new US Freedom Pavilion at the National World War II Museum.

Admission is free and open to the public. The Schenectady County Historical Society is wheelchair accessible, with off-street parking behind the building and overflow parking next door at the YWCA. For more information, contact Librarian Melissa Tacke at 518-374-0263, option 3, or by email at librarian@schenectadyhistorical.org.