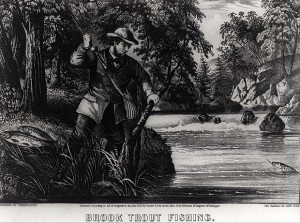 News in 1878 that Vice President William Almon Wheeler of Malone, a recent widower, would be taking First Lady Lucy Hayes fishing in the Adirondacks without her husband, gave New Yorkers something else to talk about besides President Rutherford B. Hayes’s latest feud with New York’s U.S. Senator Roscoe Conkling.

Wheeler had been disappearing into the Adirondacks to fish since he was a poor boy growing up in Malone, the county seat for Franklin County, located on the Canadian border. By the time he became a lawyer, state legislator, bank executive and railroad president, his annual fishing trips became newsworthy. As early as 1864, newspapers reported that Wheeler was heading into “the South Woods” or “the great Southern Wilderness” with a group of his political and business friends for a week of fishing.

He called his fishing party, the Saranac Navigation Company. Often staying at Martin’s Hotel on Lower Saranac Lake or Bartlett’s Hotel on the carry between Middle and Upper Saranac Lakes, they would compete for an imaginary championship belt which would be awarded to the man who caught the largest trout. More often than not, Bill Wheeler would be the man coming home, wearing the “belt.” Wheeler’s fishing party would also ship the fish they caught back to their friends in Malone. On one such occasion, they sent forty trout, each weighing between ¼ and 11 pounds, to the staff of the Malone Palladium, in a box packed with ice and wild moss.

In addition to the Upper and Lower Saranac Lakes, favorite fishing spots for Wheeler’s Saranac Navigation Company included Raquette Lake, Blue Mountain Lake, Follensby Pond, Tupper Lake and Big Wolf Pond. The anglers rarely followed a pre-determined itinerary because as one of them put it, “Wherever the spirit taketh Bill, thither shall we go.” When they returned home after a week or more of trout fishing, reporters described them as “tough” and “healthy.”

Wheeler did not allow his work in Washington during his five-terms as a congressman to interrupt his fishing expeditions. He arranged his congressional duties so that they would not conflict with his late-May excursions. Wheeler even took time out from his bruising campaign to win election to the U.S. Senate in 1881 to go fishing in the Adirondacks. 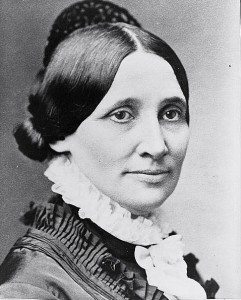 Bill invited Lucy Hayes to go fishing with him as a way to thank her for the warm hospitality she and her husband had been extending to him at the White House. Touched by the fact that Wheeler had no children and that his wife, Mary, had died three months before the Hayes-Wheeler ticket had been nominated at the 1876 GOP national convention in Cincinnati, Lucy and Rutherford had taken it upon themselves to make Bill a member of the inner social circle at the White House.

In the early spring of 1878, Bill asked Lucy if she would allow him to entertain her in the North Country by coming up to Malone and going with him on a fishing trip into the Adirondacks. Bill promised Lucy that the beauty of the mountains and the lakes would make the “splendor of a White House reception pale in contrast.”

To his delight, Lucy accepted the invitation. On Saturday, May 18, 1878, the vice president stepped off the train in Malone, closely followed by the first lady, her eight-year-old daughter, Fanny, and a mutual friend, Mrs. John Woodworth. Carriages picked them up at the station and carried them the short distance up Elm Street to Wheeler’s home where they unpacked and began to make preparations for their fishing trip. After supper, the Malone Coronet Band and the Malone Glee Club marched over to the house and entertained Bill and his three guests. Wheeler’s brick home was brilliantly illuminated and a huge throng of people came to pay their respects to the vice president and the first lady. When they made their appearance on the veranda, prolonged applause and excited cheering greeted them. Bill thanked everyone for coming and gave a short speech praising Lucy as “the true ideal of an American woman.” When he was done, the glee club broke out with its rendition of the popular hit song, “Home Again,” and a gigantic display of fireworks was set off. On Sunday, Bill took his guests to services at his church, the Malone Congregational Church. Two days later, on May 21, Wheeler led the three newest members of the Saranac Navigation Company south, into the Adirondacks.

They headed for the Prospect House on Upper Saranac Lake where they made their headquarters. Bill hired one of the most popular Adirondack guides, Lucius Evans of Saranac Lake, to help them find the best fishing spots. At the end of the first day of fishing, Bill sent the president the largest trout they had caught. In no time, the telegraph wires between the White House and the Prospect House began to hum. Hayes jokingly telegraphed Wheeler that although the note accompanying the fish he had sent him said it weighed 13 pounds, Hayes thought it weighed more like 13 ounces! Two days later, Bill wired Hayes that Lucy had just been crowned “Champion of the day” because she had captured a deer swimming in the water that afternoon. On May 30, Wheeler telegraphed the president that Lucy had caught a 15-pound salmon trout that he was sending to the White House. Calling Hayes “a doubting Thomas” because of his comment about the size of the last fish he had sent him, Bill’s telegram urged Hayes to “summon a coroner’s jury” to weigh the fish. When it arrived, Hayes was so impressed by the size of Lucy’s catch that he served it to four of his cabinet members and several Republican House leaders as the main course at an informal dinner party.

After shipping Lucy’s prize fish off to Washington, Wheeler and his guests left the Prospect House for an overnight stay at Paul Smith’s luxurious resort hotel on Lower St. Regis Lake before returning to Malone. They brought 50 pounds of trout they had caught, with them.

The next day, at noon, while they were traveling through Duane in their four-horse coach on the road back to Malone from Paul Smith’s, a heartwarming scene took place, which probably had been pre-arranged by Wheeler. As they drew near to a small schoolhouse, a dozen children came running out into the schoolyard waving American flags and formally bowing to the vice president and the first lady. Bill ordered the coach to stop and he introduced the students and their teacher to Lucy. She spoke a few words to each of them and gave them all a warm hug before leaving.

When Bill and Lucy arrived in Malone on Friday, May 31, their 11-day fishing expedition into the Adirondacks came to an end. Lucy and Fanny spent the weekend and most of the following week recovering from their outing. On Thursday night, June 6, Bill held an open house for Lucy. The next morning, he put Lucy and Fanny on a train for Washington. Soon after Lucy arrived at the White House, she wrote a note to Bill thanking him for “a wild and joyous time.” Wheeler replied that he too had greatly enjoyed himself. He told Lucy, “no one can commune with nature, as we did, without being happy, and without being made every way better.”