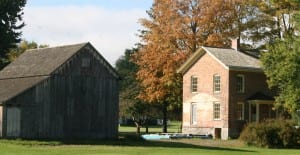 It’s the centennial year of abolitionist and suffragist Harriet Tubman’s death in 1913. Her Auburn, NY house, the home for the aged she founded on the property, and the museum attract considerable attention in upstate New York. We visited the Tubman historic site on the fifth day of our fall 2013 blogging tour of the “Cradle of the women’s rights movement in the US.”

We started with the new Sojourner Truth statue in the Hudson Valley to launch the blogging tour and went on to touch into Elizabeth Cady Stanton’s hometown in Johnstown; Matilda Joslyn Gage’s home in Fayetteville; and Seneca Falls where Stanton, Lucretia Mott, Frederick Douglass, plus other foremothers and forefathers, met at the 1848 women’s rights convention that sparked a social revolution.

On the morning of our fifth day on the road, we were the first visitors through the gate of the Harriet Tubman Home. The property’s serene and peaceful qualities speak even today of how it must have been a place of rest and healing for Tubman in years past. This is the same ground where Tubman set down roots during the last 50-plus years of her life after making a name for herself by leading enslaved people from the South to freedom in the North.

Harriet Tubman (1820-1913) is best known for her abolition activism. It’s less well known that she traveled with suffragist Susan B. Anthony on speaking tours to win the vote for women. Tubman also played a key role in organizing African-American women for the franchise. The museum exhibit spells out considerable detail about Tubman’s saga in relationship to the nation’s struggle to abolish slavery. The tale is graphic, sad, overwhelming and powerful; it highlights many instances of Tubman’s courage and fortitude when challenging this stubborn and sadistic institution.

The museum exhibit includes a panel that illustrates Tubman’s activism regarding the principles of liberty and equality for all men and women regardless of race. One exhibit panel dedicated to the suffrage movement points out Tubman’s contributions to this early wave of feminism and how she responded to discrimination against African-American women shown by some Anglo suffrage activists. Tubman worked for change through established African-American grassroots organizations; and she collaborated with wings of the suffrage movement that supported diversity within their ranks.

Many who visit Auburn are inspired by Tubman’s mythic stature that enhances the potential of this upstate New York region constituting the “Cradle” as it’s becoming more widely recognized as a travel destination and a legendary source of activism and accomplishment. At the end of each intense day of travel, it became more clear than ever to us that New York State’s “Cradle” has enormous potential for cultural and heritage tourism, and it will have considerable visitor appeal during the upcoming state suffrage centennial in 2017 and the 2020 national suffrage centennial.

Not only that, but a bill proposed in the US Congress (H.R. 664 and S. 247) intends to establish the Harriet Tubman National Historical Park in Auburn and the Harriet Tubman Underground Railroad National Historical Park in Maryland where Tubman was born under the yoke of slavery. If approved by Congress, this would be the first national park to honor an African American woman. If a Congressional web site estimating the odds for legislative approval is any indicator, a port in the storm for the Tubman national park legislation is by no means assured.

The Politics of  Pres. Obama’s August Visit to Seneca Falls 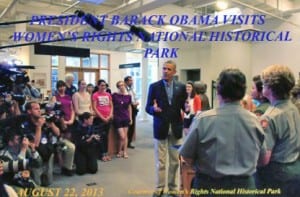 Little did we realize the extent of residue still lingering from the controversy in August 2013 when U.S. President Obama spent a night at the local Holiday Inn in Auburn but didn’t visit the Tubman Home. The day before he made a well-publicized visit to the Women’s Rights National Historical Park in nearby Seneca Falls. This raised the hopes of Harriet Tubman Boosters Club members, Tubman’s descendants, Auburn officials and local residents that the President would stop or at least drive past the Tubman Home by way of the newly-renamed Harriet Tubman Memorial Highway.

Local newspaper reports estimated that about 200 people gathered on the streets of Auburn that August morning. Many hoped that the first African-American president would pay his respects to the woman known as “The Moses Of Her People.” Some positioned themselves across from Obama’s hotel and dozens arrived before dawn at the Tubman front gate to welcome the President.

Among those waiting at the gate on August 23rd was Pauline Copes-Johnson, a great grand niece of Harriet Tubman. It was Mrs. Johnson’s 86th birthday, and the extended family members expressed the opinion that a greeting from the President would be most appropriate. They were disappointed. Mrs. Johnson, however, is not discouraged. Although she has not been contacted by the White House, she is confident that Barack Obama will return to visit the Tubman Home while he is still President. “I have faith in him, and I feel he’ll come back and bring his family,” Mrs. Johnson said in a telephone interview with New York History.

Asked if she knew why Obama didn’t stop this time, Mrs. Johnson replied: “We weren’t on his agenda for that day. He didn’t have time. We just had an idea he was going to come out to the Tubman Home   My mother’s sister, her sister, her brother, and their children were all there. Assemblyman Gary Finch and his granddaughter were waiting with us.The dignitaries of Auburn were there. Most of the people waiting weren’t relatives,” she said. No, Mrs.Johnson is not angry.


“I didn’t know a thing about Aunt Harriet while I was growing up. My mother and father never told me a thing. My cousin and I would go out there and play, and I still didn’t know,” Mrs. Johnson recalled. “After my mother passed away (during the 1940s or 1950s) my mother’s sister told me I was related to Harriet Tubman. I was astounded. It was very frustrating because all these years I hadn’t heard of her….There was a lot of secrecy going on in Auburn because of the Underground Railroad. They were used to keeping it a secret that Harriet Tubman was in town. There was a fortune on her head. The Confederates wanted her….I know she lived here before the Civil War because she went south to recruit soldiers.”

“Aunt Harriet changed the history of the United States.”

Mrs. Johnson is a direct descendant of Tubman’s brother, Ben Ross, Jr. When Johnson found out she was a great grand niece of Harriet Tubman, she began to research her famous ancestor. “She was a woman who was very strong, and she encouraged other people. The people she brought out of slavery, they just adored her because they were free. The reason we’re in Auburn is because of her. She helped people escape and not be bonded. Aunt Harriet changed the history of the United States. I’m very proud of her accomplishments,” Mrs. Johnson added.

Although the process of designating the Tubman Home as a national park has been ongoing for about 20 years, Mrs. Johnson is of the opinion that the current increased awareness is because of the centennial observance of Harriet Tubman’s death. “We celebrate her memory this whole year,” Mrs. Johnson said. “We don’t know exactly when she was born. Her birth date was never recorded.” Tubman’s birth date has been estimated to be from 1820 to 1823.

The disappointing anti-climax that occurred on August 23, 2013 in Auburn also fueled detractors. Some commentators pointed out that the U.S. President found time to exercise at the Auburn YMCA and to visit a local high school gym class before continuing on to Binghamton, NY.

Conservative blogs were rife with hostile posts, and still others characterized the no-show at the Tubman house as a “slap in the face” to the memory of Harriet herself. Only one in five visitors to a national park is nonwhite, according to a 2011 University of Wyoming report commissioned by the Park Service. The creation of a national park dedicated to Harriet Tubman would seem to be one way of addressing these statistics.

A basic question still remains: Why would the U.S. President spend the night in Auburn and not stop at the Tubman Home, as he was personally invited to do by U.S. Representative Dan Maffei, D-NY, the Congressional representative from Syracuse? The bill Maffei introduced last year would make the Tubman site in Auburn a national park at a cost not to exceed $7.5 million. Does Rep. Maffei feel slighted? Not at all.

An aide in Rep. Maffei’s Syracuse office responded: “The President didn’t visit this time, but that doesn’t mean he won’t in the future. I don’t think the President has commented publicly, but obviously he knows about the National Parks bill, and we are hopeful that when the bill is passed, he will come back and visit the Tubman Home and the Seward House.”

Rep. Maffei’s spokesperson in Washington, D.C., Whitney Mitchell, elaborated in an e-mail response: “Rep. Maffei believes this new National Park would be a significant piece of an emerging tourism region in Central New York with historical and natural attractions. It will attract millions of tourism dollars, create 70 plus jobs in Cayuga County, and provide much needed tax relief for middle-class central New Yorkers. There was a hearing on the bill in June in the House Natural Resources Committee, Subcommittee on Public Lands. We are working with the Natural Resources committee to move the bill forward and are pleased by the momentum and bi-partisan support the bill has gained. The bill has 74 bipartisan sponsors, including every member of the New York delegation.”