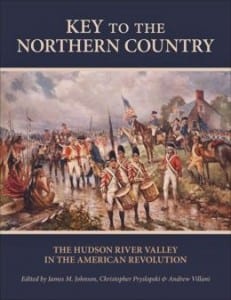 This interdisciplinary anthology provides essays about political and social issues as well as battles, fortifications, and strategy. The range of perspectives and material make it an ideal textbook for classes on American, regional, and military history, as well as a source for education classes learning about local history and critical thinking.

The Overview section provides useful historic and national context for the four sections: “Politics and Loyalties,” “Suffrage and Society,” “Fortresses, Prisons, and Huts,” and “Battles and Warfare.” Essays included in “Politics and Loyalties” discuss the division between Loyalists and Patriots throughout the region as well as the difficult decisions that some of our founding fathers made at the start of the conflict. “Suffrage and Society” examines residents’ reactions to taxation, speculation on goods, freedom of the press, and the daily stresses caused by living in a divided region at the heart of the war. “Fortresses, Prisons, and Huts” presents two articles about Fortress West Point and the forts of the Highlands as well as a detailed examination of a modest Revolutionary-era hut, and an investigation into both sides’ use of prison ships to hold prisoners of war.

The six essays comprising “Battles and Warfare” range from the Hudson Highlands, east to Redding, Conn., and north to Lake Champlain. The strategic Highlands receive double treatment, once in an article relating to the battle of the Twin Forts, Montgomery and Clinton, then as the subject for historic interpretation to the public in an article combining archaeology and public history. Upstate New York readers will be gratified to see two articles about the northern edge of our region as well, one on the domestic insurrection at the northeastern corner of Albany County and a reappraisal of Benedict Arnold’s doomed green-water fleet on Lake Champlain. This section also includes a reexamination of an aging General Israel Putnam and his actions after the fall of the Twin Forts and the account of one Connecticut militiaman’s experience in the battles for Manhattan.

Public historians and student teachers alike will find value in the articles by Clark, Doherty, Larson, Johnson and Smith, and Sullivan that also illustrate how historians “do” history. They present the use of statistical/census data, journals and correspondence, and architectural and archaeological investigation to examine and interpret the historical record.