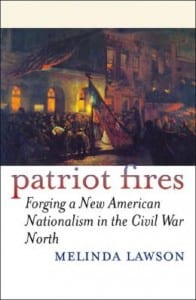 Union College professor Melinda Lawson will discusses how the Civil War brought about changes in American national identity, redefining the relationship between the individual and the government, and trace how the North came together as a nation and mobilized its populace for war.

Through efforts such as sanitary fairs to promote the welfare of soldiers, the war bond drives of Jay Cooke, and the establishment of Union Leagues, Northerners cultivated a new sense of patriotism rooted not just in the subjective American idea, but in existing religious, political, and cultural values.

Melinda Lawson is a Lecturer and the Director of the Public History Program at Union College. Lawson’s book, Patriot Fires: Forging a New American Nationalism in the Civil War North, was published in 2005. Articles by Lawson have also appeared in Civil War History, The Journal of the Civil War Era, and as chapters in An Uncommon Time: The Civil War and the Northern Home Front and Major Problems in the Civil War and Reconstruction: Documents and Essays.