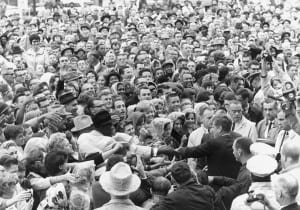 During the weekend of November 22, the Unitarian Universalist Congregation of Glens Falls (UUCGF) will present four free events to commemorate the 50th anniversary of the assassination of John F. Kennedy.

“Over the course of the weekend, we aim to shine light on radical and dramatic changes JFK was planning in foreign policy, just prior to his assassination. Specifically, JFK was intending to withdraw U.S. troops from Vietnam. After the assassination these plans were reversed and kept secret from the public, and these decisions still affect us today,” Sally Strasser, a coordinator of the UUCGF events, said in announcement of the events.

The four events will be:

3. Sat., November 23, 1 pm. Workshop and discussion about the Kennedy presidency and the assassination. Free.

4. Sun, November 24, 10 am. Worship service entitled “High Ideals, Death and Renewal” followed by a light potluck lunch and a closing ceremony honoring witnesses to events of the assassination. Free.

“Noah’s Ark,” a play written by Ginny Cunningham, is based on the 2007 book, JFK and the Unspeakable, written by James Douglass. This book reveals widely unknown Kennedy policies, actions, and intentions, reversed after the assassination. Subjects in the book that will be discussed during the UUCGF Nov. 22 weekend of events include:

1. Kennedy’s intention to end the war in Vietnam and would not have spent $220 billion and 55,000 American lives fighting the war there.

3. Kennedy’s invitation to the Soviets to join the U.S. in landing a man on the moon.

4. Kennedy’s authorized cuts of U.S. military bases around the world.

Photo: President Kennedy at a rally in Fort Worth, Texas on November 22, 1963.