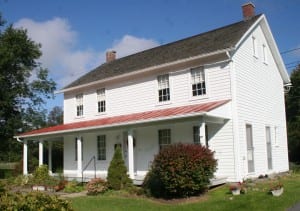 Each week day there’s a consistent flow of visitors at the Harriet Tubman Home, with people anxious to find out more about Tubman, her life story, and see for themselves where Tubman lived and operated a haven for the aged at 180 South Street in Auburn.

Visitors pull into the parking lot to visit the property, museum exhibit, and take advantage of guided tours from the moment the doors open in the morning until closing at the end of the day. License plates on the travelers’ vehicles are from New York State and beyond.

Visitors are invited to tour the hospital structure that Tubman established and where she spent her last days. Nearby is the brick house where she lived. Tubman purchased 25 acres at a public auction in 1888 for the purpose of establishing a home for formerly enslaved African Americans. In 1895 she incorporated the Tubman Home for the Aged. The property was burdened with a mortgage, however, and so she deeded it to the African Methodist Episcopal Zion Church in Auburn in 1903. The Church paid the mortgage and maintains ownership of the property to the present day. Tubman died March 10, 1913 at the age of 93. She was buried with military rites in Fort Hill Cemetery in Auburn.

Praise for Tubman wasn’t at all generous prior to the Civil War when she made a name for herself by leaving bondage behind on the Eastern shore of Maryland and then leading others to freedom to the northern states and Canada. This has changed. Inside the former Tubman Home for the Aged, Tubman’s Bible is displayed on the bureau next to her bed. It has recently returned from a swearing-in ceremony in Washington. Supreme Court Chief Justice John Roberts used Tubman’s Bible for the private swearing in ceremony of the new chair for the U.S. Commission on International Religious Freedom, Robert P. George. Princeton University scholar Cornel West held the Bible for George, a fellow Princeton University professor.

Though Harriet Tubman may have been gone these past 100 years, she is clearly not forgotten. The path where visitors walk goes past flower gardens and an apple orchard to the museum building where Tubman’s gripping life story is displayed with dramatic photographs and illustrations on exhibit panels for the benefit of fascinated visitors. Tubman is quoted as saying: “There were good masters and mistresses, as I’ve heard tell. But I didn’t happen to come across any of them.”

Born Araminta Ross, the fifth of eleven children born to Harriet Green and Benjamin Ross on the Eastern Shore of Maryland, Tubman said that her first memory was of being cradled outdoors in a hollow log and seeing leaves blow in the wind above her. Later, her father taught her to navigate by the stars. When young, Tubman said she begged to be able to work outdoors and managed to save a small nest egg when she was allowed to “hire herself out” to do grueling work on neighboring plantations. She spoke of dreaming to be free. Familiar with elements of the natural world and with the sky as her map, Tubman prepared herself for her work that has become legendary in terms of challenging the institution of slavery.

Visitors to the museum’s exhibit are introduced to all the many ways in which Tubman’s determination was strengthened by a cruel blow she endured at the age of fifteen. When the teenager refused to restrain a runaway slave for a beating and enabled him to escape, the thwarted overseer picked up a heavy iron weight and threw it at her head. This deforming injury caused Tubman to suffer seizures and hallucinations for the rest of her life. She considered these symptoms a blessing. Tubman said that her visions strengthened her faith that she was following the will of God and took away any fear associated with the dangerous and risky work associated with leading others to freedom. 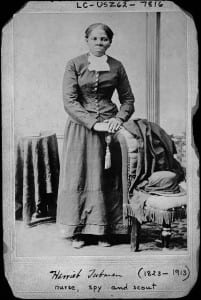 In 1844, Harriet married John Tubman, a free African-American who lived nearby in Maryland. She remained in bondage, however, and so would her children. She longed to make her escape via the Underground Railroad. Her brothers and husband, however, didn’t accompany her. Harriet escaped alone at night carrying food and her prized quilt. She presented the quilt to the first woman who took her in and directed her to the next safe house. Eventually Harriet arrived in Philadelphia, a hub of the Underground Railroad. At great risk to herself, she returned south a short time later to lead her sister’s family to safety. In 1851 she made a second return trip, this time to rescue her brother James,and his friends. On her third trip south, she stopped at her husband’s cabin and discovered that he’d remarried and had no interest in traveling north. Between 1851 and 1857 she made two trips per year to the Eastern Shore of Maryland.

Reports of the number of people Tubman led to freedom range from 80 to 700. The discrepancy reflected in these estimates may be explained by her Civil War work where she helped enslaved people join the Union Army, as opposed to leading fugitives from southern states to Philadelphia, upstate New York, and Canada. She also directed fugitives to safe houses along the way. Harriet married Nelson Davis in 1869, a friend she had met in South Carolina during the Civil War. William Seward, Secretary of State during the Lincoln and Johnson administrations, attended their wedding. Seward had obtained some property for Tubman when she first moved to Auburn, although Tubman insisted on paying him for it.

Another Auburn resident, Martha Coffin Wright, a sister of Quaker minister Lucretia Mott, welcomed Tubman when she moved to Auburn to recuperate from increasingly frequent seizures she experienced during her Civil War service. In July 1848, Mott visited Wright in Auburn and then went on to participate in the first Women’s Rights Convention in nearby Seneca Falls, New York. Wright signed the Declaration of Sentiments.

In 1980, the U.S. Congress recognized the importance of the Seneca Falls Convention by creating the Women’s Rights National Historical Park at the site of the 1848 convention. A statue of Wright at the park shows her as she was at the time, pregnant. Wright’s home was also a stop on the Underground Railroad.

Along with William and Frances Seward, the abolitionists John Brown, William Lloyd Garrison, Frederick Douglass, Parker Pillsbury, Charles Sumner, and Wendell Phillips were among Tubman’s associates and close friends. Some of their photographs included in the museum exhibit are a potent reminder of how upstate New York became known as not only the cradle of the women’s rights movement but also a hotbed for abolition and temperance organizing, as well as many 19th century free thought movements. 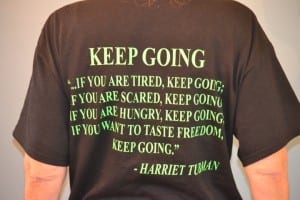 These words continue to inspire the nation’s school children, travelers, lovers of American history, and Tubman descendants, in addition to the many supporters of the national park proposal. Other known and unknown considerations may be in play when considering whether or not the Harriet Tubman historic site in Auburn will become a national park.

It’s possible that Obama was distracted by other pressing issues when he left Auburn without visiting the Tubman house, or it might have been considered unwise for the President to draw attention to the Tubman Home (and the related national park proposal) given the current Republican majority in the House of Representatives. Other factors may include the antipathy of many Republicans towards Obama and the fact that all 435 seats in the House—where the bill is currently stalled– will be subject to elections in 2014. Although mid-term elections are generally challenging for sitting presidents, some Democrats may be hoping that electoral change could benefit their pet projects.

The Harriet Tubman Home, 180 South Street, Auburn, NY 13021 is open for tours February 1 – October 31 on Tuesday through Friday from 10 a.m. to 4 p.m.; on Saturday from 10 a.m. to 3 p.m. From November 1 to January 31 the Home is open by appointment only. Call 315-252-2081 or email harriet tubman@verizon.net. Website: www.harriethouse.org. Also, www.HarrietTubmanBoosters.org offers free events to commemorate Tubman’s life.