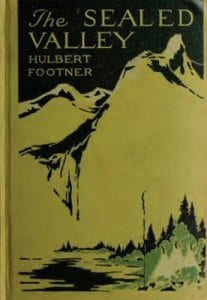 Catamount Mountain, the one rising from the shores of Taylor Pond north of Whiteface, has always been one of my favorite climbs.

Exposed rock can be so alluring, just one of the many elements that draws in people who love the outdoors. And Catamount has it all for the average hiker/climber―beautiful woods, a conical peak with great views, a dike to climb through, and lots of open, rocky expanses.

We visit such places for our own personal reasons. For me, at the beginning of more than four decades of hiking, the most powerful attraction was the rocks―ancient and bare, and preserved in their natural state, allowing a glimpse of undisturbed wildness. Only the rocks weren’t as undisturbed as I thought.

Solitude, peace, and oddly enough, danger, were also elements that drew me to Catamount. Every time I ascended the steep, open, rocky areas or skirted cliffs and drop-offs, it struck me how dangerous the place could be. I wondered how it was that more accidents weren’t reported over the years.

I had to know more. A little research revealed that there was at least one fatality on Catamount, and that not all of the mountain’s rock formations were entirely natural. Both stories, coincidentally, featured a Dorothy.

The fatality occurred in 1936, when a family excursion ended in tragedy. Blakely Webster, superintendent of the hospital at Clinton Prison in Dannemora, owned a camp on Silver Lake, a few miles north of Catamount. In September of that year, the family decided to share one last outing before young Dorothy, accompanied this day by her college roommate at Syracuse University, returned for her senior year.

During the steeper stages of the ascent, Dorothy paused at a lookout, somehow lost her footing on the wet rocks, and plunged more than 100 feet to her death. Her brother Daniel rushed to Ausable Forks for help, returning with a doctor, police, and others on what turned out to be a recovery mission. It was believed Dorothy had died on impact.

As for the natural rock formations that were such a powerful draw for me, maybe a tiny bit of the luster was lost when I read of a not-so-natural occurrence (but I still love that mountain). It also struck me how a simple thing like an innocent passage in a book can have far-reaching effects.

Movie-making is part of Adirondack history, and in 1915, Sealed Valley was shooting scenes in the Saranac Lake area. The film was based on a story by Hulbert Footner, the Canadian author of fifty books. Among a series of westerns based in the Northwest was his novel, The Sealed Valley. The movie version starred Dorothy Donnelly as Indian maiden Nahnya Crossfox, and Jack W. Johnson as Dr. Cowdray. At the movie’s finale, the entrance to Nahnya’s tribal valley is sealed by a massive rockslide. 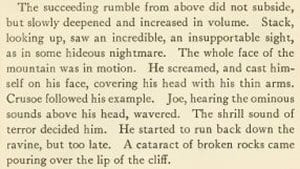 Catamount was chosen for the climactic scene. A large ledge was selected, and 250 pounds of dynamite were detonated, sending an estimated 300 tons of rock down the mountainside. Even then, the movie folks considered the effort a failure because much of the targeted rock remained solidly in place. According to one report, the scene was rated “fairly good, but it was not up to the high standards demanded by the Metro Film Company, and so it will have to be done over again.”

It seems amazing that, indirectly, a few paragraphs from the imagination of a Canadian author writing about adventures in the Great Northwest led to the destruction of a rock formation on Catamount, 3000 miles east. Who’da thought?

It also seems amazing that the film company was allowed to dynamite part of the Adirondack scenery.

Catamount will always be a beautiful place to visit, but on a climbing trip about a decade ago, my partner Jill and I experienced something that makes the mountaintop even more special.

We had reached the summit early on a crisp, cool day, inhaling the beautiful views in all directions and enjoying the solitude. But just after our arrival, we heard some noise, and as it grew louder, it seemed obvious that others had followed not far behind us. So much for solitude.

But we were wrong. The noise intensified, and though we were able to pinpoint its location as it neared us, there was nothing unusual in sight. Nothing.

And then, within about 15–20 feet from where we stood, a small bush moved. The nature of the noise and the subsequent movement of adjacent bushes revealed the presence of a small whirlwind, a mini-tornado. The mountaintop was otherwise completely still―not even the whisper of a breeze―which made it all the more exciting. We could hear the loud whirring sound of a strong wind, but all was calm.

What a great moment! The power it exhibited was remarkable. Though appearing to be only about three to six feet high, it moved like a phantom, completely invisible, its presence revealed only by the loud noise and the distinct shaking of every bush and small tree encountered.

We followed its progress across the summit and down the sloping surface towards Taylor Pond, until it finally disappeared. In hopes of similar action, we lingered on the mountaintop for some time, but nothing else unusual happened.

My assumption is that it was similar to a dust devil (without the dust), caused by the sun rapidly heating air near the mountain’s surface, and the heated air then moving against much colder air.

That place was already special to me. The weird weather moment was just icing on the Catamount cake.

Photos: Book cover of The Sealed Valley (the movie dropped “The” from the title); near the book’s end, the scene that played out on Catamount.