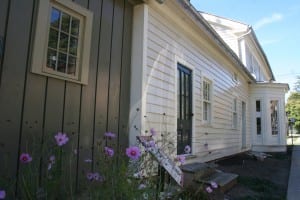 It’s helpful to know about the Matilda Joslyn Gage Center in advance or you might miss it when driving through Fayetteville, NY (Onondaga County) – even though it’s strategically located on the main street.

Fayetteville is a small upstate town in the “cradle” of New York’s women’s rights movement, centrally located for those activists who worked with Gage and others while seeking radical social change in the years before and after the Civil War.

Though suffragist Matilda Joslyn Gage is viewed by some as having been written out of history or that her contributions have been marginalized in the suffrage movement, this perspective may be undermined by such upcoming events as the one-woman show, “Mimi Kennedy Finds Matilda Joslyn Gage,” at the Everson Museum of Art’s Hosmer Auditorium in Syracuse, NY on October 3, 2013 at 7 p.m. The event is a fundraiser for the Girl Ambassador for Human Rights Program, the Matilda Joslyn Gage Foundation, and the Everson Museum of Art. Mimi Kennedy most recently appeared in Woody Allen’s film, “Midnight in Paris.”

By changing the balance of power in how suffrage leaders are viewed after more than 100 years, we inevitably run into the factions that have sprung up in this slice of women’s history. There are those for whom Susan B. Anthony is the star of the movement. Still others seek justice for Matilda Joslyn Gage to create what they believe is her rightful place in the sun. We’ve run into yet another contemporary faction that’s opinionated about suffrage leader Carrie Chapman Catt and maintain she has crowded out Harriot Stanton Blatch in the memories of contemporary people. 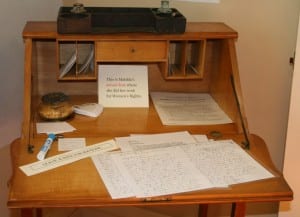 Back in the days when Elizabeth Cady Stanton (1815-1902), Susan B. Anthony (1820-1906), and Gage (1826-1898) were amicable, all three activists were in the forefront of the early struggle for women’s equality together. Over time their roles became more defined. Susan became the activist. Gage and Stanton were the theorists. They were close for several decades and then splits caused many ragged edges.

During the good times, Susan visited Matilda in Fayetteville and etched her name on a pane of glass in the upstairs bedroom window. The signature is real (see upper pane, middle segment). But as movement politics became complicated, numerous disagreements drove a wedge between the three who had previously been considered the “triumvirate” of the women’s rights movement.

The reasons for this aren’t overtly featured in the interpretative information at the Gage Center in Fayetteville, though someone could ask the appropriate questions and find answers from the docents. The tours are primarily self-guided. Once you step through the portal of the Gage Center at 210 East Genesee Street, the veil between the past and the present thins.

It seems as if suffrage leader, writer, and abolitionist Matilda Joslyn Gage’s spirit lingers in every room. It isn’t a stretch to imagine Matilda and Susan discussing movement strategy, or the joyful sounds of Matilda’s children playing, or the lingering voice of L. Frank Baum, Gage’s son-in-law who told Dorothy stories to his children and then went on to write the internationally acclaimed The Wonderful Wizard of Oz. Baum and Maud, Matilda’s daughter, were married in the front parlor, and there are no ropes to prevent visitors from sitting on chairs or playing the parlor piano to join in with the celebration.

The Gage Center in Fayetteville is not only a historic home, it’s an interactive museum. You’re invited in, told to check your dogma at the door, and to think for yourself. A day’s visit isn’t a casual activity. This is a museum of ideas.

Ideas are what drew Stanton, Anthony, and Gage together in the early days of the movement and what later drove them apart. Ultimately it boiled down to a question of doing things “right” versus doing the “right” thing. Susan B. Anthony built a broad national coalition for the winning the franchise for women and set aside other issues Gage felt were extremely important, such as the separation of church and state. Matilda Joslyn Gage wouldn’t compromise when it came to standing firm about issues she insisted were important. Elizabeth Cady Stanton also challenged her old friends because of her views.

The friendships and political alliances, personal and social interests associated with Gage, Anthony, and Stanton comprise a web of complexities that have engaged scholars for decades. Gage didn’t want just to reform a social system. Her experience with Haudenosaunee culture convinced Gage that a matrilineal society not only worked, but that gender relationships could be balanced. Issues of race further drove some suffragists on the national level apart and others, together. The alliances and compromises associated with the suffrage movement bring to light the many difficulties and complexities of this 72-year nonviolent social revolution to advance the equality agenda.

Because the Gage Center lies in the “Cradle,” it’s impossible to drive by the Gage home in Fayetteville without stopping. Inside the building, visitors can almost hear Matilda Joslyn Gage whispering in their ears when they relax on couches and chairs within the walls of the home where Gage lived for 44 years. You can write on the walls or watch a film. Young people can play with toys, sit on chairs, read her books and scrapbooks, dress in Native American clothing, play with a dollhouse, and ponder provocative quotes posted on the wall.

When you’re invited to write a note to Matilda at the very desk where she worked, you sense that not only did she needle people in her own time, she pushes you to think about the implications of all your actions today. Gage was controversial, and she remains so in these times with her probing questions about the nature of freedom, the importance of going beyond reform to a radical restructuring of social systems, and much more.

“This should be a house of dialogue about social justice ideas, as it was during the time Gage lived here. There’s no reproduction wallpaper and furniture; no artifacts drive this story,” explains Sally Roesch Wagner, Ph.D., executive director of The Matilda Joslyn Gage Center. Wagner is a Gage scholar and an advocate of bringing Gage to the forefront of public awareness after years of what she believes is a lack of recognition for her contributions and distinct perspectives.

The Matilda Joslyn Gage house is an essential part of the “Cradle” of the women’s rights movement in America that is located within a cradle-like shape consisting of historic sites in a concentrated geographic area of the Finger Lakes region of New York — once a hotbed of free thought.

The Finger Lakes region has many attractions, including wineries, scenic views, golf, lake cruises, skiing, a Native American historic site (Ganondagan), and much more. The fact that the “Cradle” is easily accessible from the NYS Thruway makes it a natural destination for visitors. But in this time of economic challenges, historic sites are scrambling to keep their doors open. The Gage Center, for example, must rely on admission fees, fundraisers, donations, and the labor and enthusiasm of volunteers where burnout often enters the picture, a situation facing nonprofits all over the nation. This is why the Mimi Kennedy performance on October 3rd and fundraisers like it play such an important role in the Gage Center’s programming.

Preserving Susan B. Anthony’s signature etched into a pane of glass in a historic building in a small upstate New York town may not be a high priority for some who are acutely aware of a world struggling with enormous social and economic crises. Others insist that community and financial support of historic sites like this should be an essential element in the development of a geographic theme park that features key players of the suffrage movement, plus many grassroots activists who were involved in the movement, including African Americans (Frederick Douglass, Harriet Tubman) and other including Quakers who were involved in both abolition and women’s rights.

Gage, Stanton, and Anthony worked together, argued with each other, and carried the torch for women’s rights for decades in the “Cradle” of the women’s rights movement in the United States. And there’s a growing audience of visitors and those from the US and around the world who are interested in learning more about these times and then applying the lessons learned to the personal and social challenges of today.

Awareness of and support for historic sites in Johnstown, Seneca Falls, Fayetteville, Rochester, Auburn and other destinations in the “Cradle” are viewed by many as a critical part of plans for bringing more visitors to New York in the ongoing efforts to link economic development to cultural and heritage tourism. Cultivating more interest in the “Cradle” is essential for the upcoming NYS suffrage centennial celebration in 2017 and the national suffrage centennial in 2020. About this, many agree.

Susan B. Anthony’s signature on the window pane in Matilda Joslyn Gage’s home is indelible proof of their friendship. Although there were strategic and theoretical differences between them toward the ends of their lives, the ultimate success of their efforts by the next generation would have been impossible without the dedicated mutual friendship of Stanton, Anthony, and Gage. For this, there is still much to celebrate. And promoting trips to the “Cradle” is just what “I Love New York” should be thinking about.