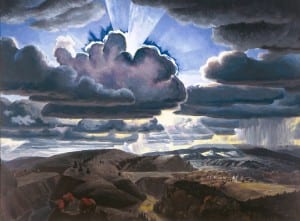 A new exhibit opening at the New York State Museum in Albany on Saturday, “Weather Event,” focuses on Charles E. Burchfield’s depictions of the weather south of Lake Erie, where the artist lived for most of his life. Individual weather events are examined through both an artistic, historic, and scientific lens.

Burchfield’s representations of weather, wind, skies and sounds are unique historical records of the environment near Lake Erie. In 1915, Burchfield made a series of sketches that show the changing weather and position of the sun over the course of several hours, which he called all-day sketches. Decades later, a 1950 journal entry recounts “The Day the Sun Disappeared over Western New York.”

In these unique instances and others the visitor experiences the landscape through Burchfield’s eyes. This exhibition presents the dramatic and complex natural phenomenon chronicled in more than 50 years of Burchfield’s writings, drawings and paintings.

“Charles Burchfield (1893-1967) was an artist, writer, designer, and naturalist whose character was defined by his observation of the here, the now and the hereafter,” said Anthony Bannon PhD, Executive Director of Burchfield Penney Art Center. “This exhibition, drawn from the 26,000 objects in the Burchfield archive at the Burchfield Penney Art Center, observes the artist’s contemplative transcription of weather, the cycles of environment and atmosphere – and what it all meant to him.  We are delighted to have the opportunity to share his vision with the thought leaders of our state.”

Burchfield’s early works were imaginative, stylized landscapes and rural scenes that often incorporated a personal language of symbols. After moving to Buffalo from Ohio, he became engrossed in the city’s buildings, harbor, rail yards and surrounding countryside. From this period, his works show an appreciation for American life and a complex assessment of urban life in comparison to the countryside and small town of his youth.

Burchfield’s artistic achievement was honored by the inauguration of the Charles Burchfield Center at Buffalo State College on December 9, 1966.  He died on January 11, 1967.  The museum, now called the Burchfield Penney Art Center, holds the world’s largest collection of his work.

Burchfield Penney Curator and Manager of Archives, Tullis Johnson, worked with climatologist and Buffalo State College professor Stephen Vermette, Ph.D., to present the exhibit.  It will run through February 23, 2014 in the Museum’s West Gallery.

Dr. Vermette also worked with students from Buffalo State College to recreate historical weather forecasts for the days that many of Burchfield’s early watercolors where made. These forecasts are accessible in the exhibit through the use of smart phone technology.