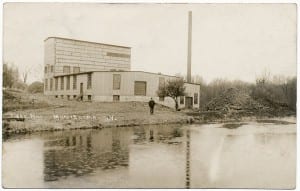 On Monday, February 19th, 1917, Bankruptcy Referee Stone closed the books on the Montezuma Fibre Company, ending the short history of a business now forgotten. The company was $69,876 dollars in debt and the investors of the company were going to lose all. After ten years of business, the company had only $1,619 left in the bank.

The Montezuma Fibre Company had it origins in 1906 when Eugene Kimmey of Syracuse came up with a process to use flag (what we now call cat tails) as the main ingredient in making a heavy weight, cardboard like paper. The 20,000 acres of Montezuma swamps were filled with “Montezuma wheat”, or flag. It grew wild, it was easy to harvest and the land it grew on was cheap. In the late 1800’s many locals supplemented their income by harvesting and shipping flag to distant cities for use in the making chair seats and caulking barrels. But for all their efforts these men barely made a small dent in the vast swamp filled with cat tails. Thus, the raw material sat waiting for someone to invent a way to use it.

By 1900, there was very little wood left in upstate New York. Clearing for farmland and timber production had wiped out the forests. So to see inventors and investors turn to alternate sources of pulp fiber for paper production should not be considered as unusual. That is why Eugene Kimmey and others turned their eyes and thoughts to the thousands of acres of waving cat tails that grew along the Seneca River. Kimmey was not alone, as apparently inventors from the Solvay Process Company had devised a similar method of turning flag into paper.

In 1906 the Cayuga Marsh land rush was on as the newly incorporated Montezuma Fibre Company and Solvay Process began to by up what had been considered worthless land. The price of an acre of swamp land went from seven to sixty dollars. And together both companies bought seven thousand of acres of wet land, at the same time building mills to convert the flag into paper pulp. The Montezuma Fibre Company hired Syracuse carpenter and builder Frank Kimmey, the brother of Eugene, to build its plant on land leased from Lena Clark. Lena was the widow of James Clark.

The Clark name and Montezuma had ties back to the late 1790’s. Lena lived in New York City but still owned many acres of land in and around the village. The land that the owners of the Fibre Company chose was bounded by the Erie Canal on the north and the Seneca River on the west. Boats could be loaded and unloaded at its front door and water for the mill could be pumped from the river. The lease spelled out the terms. Ten years at $200 per year, with the rights to use build an elevated reservoir on a near by drumlin, the right to store harvested flag on the land from September 1st to April 15th, and the rights to build a large building. The lease was signed on September 14th, 1906.

Frank Kimmey had a job to do. The building was to be sixty feet by eighty feet, with foundation walls of concrete eleven feet high. The main building was to have brick walls two stories high. A boiler house twenty six by thirty six feet was attached, built of the same materials. The building would cost $22,000. Frank was given orders to build quickly. The investors had raised over $50,000 to start the business and without a plant to convert the flag into paper, no money could be made until the plant was in operation. Work started in October 1906, and was finished by April of 1907. Local papers hailed the beginning of operations.

Although flag grew in great abundance, it grew on swamp land. And this posed a problem to the mill owners. The tons of flag needed would exceed what a man and team, or many men and teams, could harvest and deliver. Early experiments were made using a hay reaper and this apparently worked with some success, when the ground was dry. When the land turned to soup, men needed to cut the flag by hand. But even with the reaper cutting the stalks, men still had to follow behind to gather and tie the stalks into bundles and then load it onto wagons or boats. On the other end, men would be needed to unload the wagons and boats and then load it into the mill. At harvest time, the company ran ads asking for fifty men to help in the cutting and gathering of the flag.

There was a danger to the plant owners that perhaps they never considered when they thought of using flag as the main ingredient in the paper. And being from Syracuse, maybe they never had viewed the swamps during a growing cycle. They may have stood on the hill over looking the swamps and saw the thousands of acres of flag and thought of the vast untapped potential. But maybe if they had talked to the locals, they may have had different thoughts. For the locals knew that the swamps could burn during a dry season, or become too wet to work in during a rainy season. These natural factors could greatly diminish the flag harvest, a critical factor when thousands of tons of flag were needed in the production of the paper. This was something that they had no control over. It is not known if the mills were set up to shift production to another source of fiber such as wood pulp, but it doesn’t appear to be so. There is one news account of the plant using hay or straw to boost production, but that appears to be limited.

The actual paper making process was well reported in the paper. The flag was cut into small pieces and then cooked by steam in a giant vat. From there, the softened flag was beaten into a stiff batter, looking something like boiled pumpkin. Pipes carried the pulp into a shaper that flattened mix board like sheets. Steam heated rollers continued to flatten and dry the pulp, which became paper like. The end result was more board then paper, and it was used to make boxes and lining of shipping crates. The paper was very moisture resistant, making it ideal for barrels and pails. With the addition of leather scraps, shoe soles could be made.

By 1913, the competitor to the Montezuma Fibre Company, the Solvay Process Company, was shifting to wood pulp to make their paper barrels, moving away from the swamps forever. Their claim was that there was not enough flag to make the amount of barrels needed. It wasn’t that the product was inferior; it was that there wasn’t enough of it to make production feasible. Also in 1913, signs of business troubles in the Montezuma Fibre Company begin to become apparent. The paper reported that Charles Wagner had sued and won a judgment against the company for non payment of bills. And business troubles continued. It appears that the company was struggling to pay any of its bills, as it is listed in the county tax foreclosures. In 1913 the company was $110.75 in arrears, and then again in 1915 being $212.83 in arrears. By 1917, the company, deep in debt, filed for bankruptcy and the doors of the plant were closed forever. Interestingly, the ten year lease to use the land was up. Eugene Kimmey, the inventor of the process and the plant manager returned to Syracuse and took up auto mechanics. The local folklore about the sale of the plant to a second investor is not true. The company simply failed.

But the flag harvest continued for years after. Many in the Montezuma area were concerned when the building of the barge canal, which would help to drain the marshes, threatened to greatly diminish or kill the flag forever. The canal did drain many acres of the swamp, but enough remained to ensure that the harvest could go on. The paper again reported that in 1925, men were cutting and storing flag and then shipping it to distant furniture manufacturers and to nursery stock growers who used it to protect their crops against the cold.

Frank Kimmey built his foundation to stand the test of time and it can be seen today, one hundred years after it was put up. It is buried in the woods and brush along the south side of the old canal. Walk west on the berme side of the canal, under the power lines to where the canal curves around the small hill and enters the flats. Look closely through the trees and you will see the concrete foundation with its many walls and arched doorway. Stand upon the foundation and try to imagine the plant in full operation. The company employed forty to fifty men, mostly from the village and surrounding farms. The plant was a beehive of activity. Black coal smoke would have been poring out of the tall boiler chimney, covering the village with fine soot. Boats and wagons were loaded with finished product. Workers piled cut flag near the mill until it would be used. Hundreds of men worked in the swamps cutting and bundling the flag.

Now it is all gone. The brick walls have caved in or perhaps were taken for reuse in other buildings by locals. Slowly the concrete is being weathered away and at some point nothing will be left to tell the story of the Montezuma Fibre Company.