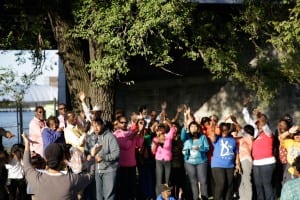 Quietly, a line of singers circled a lone tree on the edge of the Harlem River, in the shadow of the 145th Street Bridge, late Sunday afternoon on September 29.  The group swelled in numbers as the shadows lengthened. Hums, moans, soft cries and low tones began to form a chorus of spirit noises as the performance “Saved” got underway.

Conceived as one of a series of commemorative performances to mark the 1911 lynching of Laura Nelson and her son from an Oklahoma truss bridge, “Saved” was an extraordinary outdoor art and history event. The time-based artist, Kara Lynch, says her “Saved” series is a response to terrorism and brings history, staged in cooperation with black communities to places that have a memory and legacy of violence. The performance included dance by Impact Repertory Theatre and singing from three different church choirs in the community, and an original score by composer Courtney Bryan. 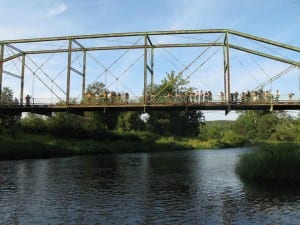 Lynch first created a version of “Saved”  on the Denniston Hill Bridge, in Woodridge New York, on another steel truss bridge. For that 2008 piece, she recruited performers and used a sound installation devised from field recordings she made on the original Oklahoma bridge where Nelson was killed, and from a Juneteenth celebration in Galveston, Texas. Lynch has been grappling with the issues of how to respond to the violence of lynching without doing another violence to those murdered by displaying the imagery from the mob executions.  In Harlem, her vision was abstract and music-based, suggesting ritual through its extended tableaux.

Lynch integrated the event into the community by recruiting the choirs from Convent Avenue Baptist Church, (conducted by Gregory Hopkins), First Corinthians (conducted by Patrice Turner) and Bethany Baptist (conducted by the composer Courtney Bryan). While the large ensemble of church choirs sang, a mysterious line of white-clad figures appeared along the bridge above. They slowly turned, catching the attention, of the audience down below, as their slow movements had the effect of decelerating the passage of time. “The figures on the bridge referred to an NAACP Silent March from 1917,” explained Lynch. That protest included 10,000 people  — the women dressed all in white, and men in black — parading silently up Fifth Ave. to the beat of muffled drums, to draw attention to the mob violence in East St. Louis which killed between 40 and 250 black people. 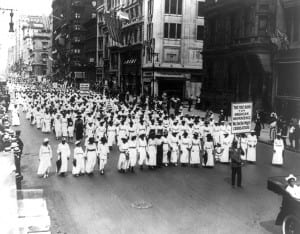 The “Saved” event references a particular brutal case of lynching and the historical tragedy of racist violence. But its artistic means are suggestive rather than documentary. The audience was motivated to dig up details on the Laura Nelson case for themselves, and they were cued to link past and present experiences of racial terrorism.  The performance was akin to a funeral procession, where bodily witness to historical tragedy, rather than recreation of events, was at the heart of the experience. This artistic stance shows a historical awareness of how looking at lynching has functioned in American history.

The history of looking at lynching has several complex layers, which shape the staging of the series. First there were the violent acts, then the imagery of those acts, which included photographs and souvenir postcards, and more recently, there have been exhibitions of this history using those images. James Allen collected photographs and postcards of lynching which were shown to acclaim in New York in 2000 in Without Sanctuary: Lynching Photography in America. The act of witnessing these public murders has been called a form of education in white supremacy by historians studying the phenomenon of lynching. The second level of looking at the documentation might constitute part of that race propaganda, or it might be part of the anti-lynching movement, which gained national force right around the time of Laura Nelson’s death. 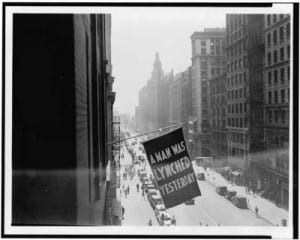 The National Association for the Advancement of Colored People, incorporated in 1911 emphasized an effort to end lynching and pass a Federal anti-lynching law in its early action agenda. An NAACP pamphlet on the Rubin Stacey Lynching in Fort Lauderdale, Broward County advises how the NAACP thinks viewers should see such photographs. “Do not look at the Negro. His early problems are ended. Instead look at the seven WHITE children who gaze at this gruesome spectacle.” The NAACP deliberately juxtaposed lessons in anti-racist activism with the presumed lessons in racial prejudice being inculcated in the white children seen in the lynching photograph reproduced in its pamphlet.

These efforts to grapple with the visual impact of lynching continued, as the NAACP not only compiled reports on cases of mob violence but also sponsored the Art Commentary on Lynching in 1935, an exhibition that displayed work by prominent artists such as Paul Cadmus and Isamu Noguchi. Reginald Marsh contribution was entitled “Her First Lynching” echoing the insight that parents were teaching their children violence through their attendance at these ritualized killings. 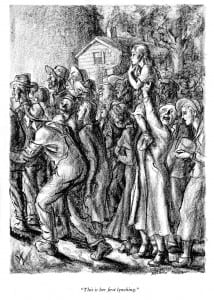 Kara Lynch is mounting an artistic and historical intervention that reverses that generational teaching, providing today’s audiences with reflections on violence and suggesting that racial understanding might come through witnessing memory, rather than erasing the evidence of the violent past.

An interesting generational divide on the phenomenon of American lynching emerges in the story of Woody Guthrie. He grew up in the town of Okemah, Oklahoma where Laura Nelson was lynched and recalled that his father Charlie was involved in it. Sickened by this memory as am adult he wrote the song “Don’t Kill My Baby and Son,” which narrates Laura Nelson’s case.“

As I walked down that old dark town. In the town where I was born,

I heard the saddest lonesome moan I ever heard before.

My hair it trembled at the roots Cold chills run down my spine,

As I drew near that jail house I heard this deathly cry.

You can stretch my neck on that old river bridge, But don’t kill my baby and my son.