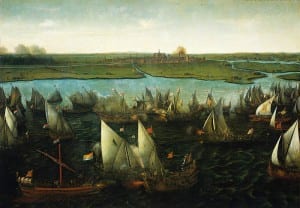 The presentation slides from all five presenters at the 36th New Netherland Seminar on October 5th are now available online. The seminar took on the question: What were the consequences of the 1568 revolt which began in the Low Countries against the Habsburg Empire and lasted 80 years? People were displaced – some fleeing the ravages of war; others were fleeing religious persecution.

A disconnect from the Empire meant a disruption in normal commercial activity. Markets and waters once friendly turned hostile. Trading companies eventually replaced the former commercial routes and exploration for new routes and markets was undertaken. On October 5th in New York City five Dutch and Belgian speakers will give illustrated lectures about the effects of this revolt on the Low Countries and the settlement of North America.

The presenters who provided their work for publication online include:
David Baeckelandt: “The Flemish Contribution to European Settlement in America.”

Guido Marnef: “People on the move: migration movements from the Southern to the Northern Netherlands in the time of the Dutch Revolt.”

The seminar was hosted by The New Netherland Institute, and sponsored by the Consulate General of the Netherlands in New York, Flanders House, and the New-York Historical Society.