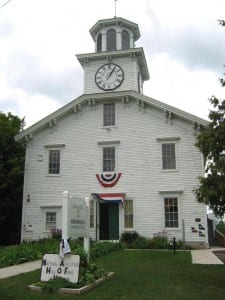 The National Abolition Hall of Fame and Museum (NAHOF) in Peterboro NY is finalizing its 2013 programs for the induction of four 19th Century abolitionists.

A program on each nominee will be presented for the Colgate University Upstate Institute Abolition Symposia on Saturday afternoon, October 19th at the Peterboro United Methodist Church, across the road from NAHOF at 5255 Pleasant Valley Road:

Following the afternoon symposia, The Copper Turret of Morrisville will serve a 19th Century anti-slavery dinner at the Smithfield Community Center, the site of the inaugural meeting of the NYS Anti-Slavery Society in 1835. (Reserve dinner by October 7.) The evening ceremonies will include formal oral nominations by relatives and affiliates interspersed by readings and music directed by Hugh C. Humphreys. The Lingo Family Singers and Max Smith will perform the anti-slavery musical selections. This program is supported by the New York State Council on the Arts with the support of Governor Andrew Cuomo and the New York State Legislature, administered by CNY Arts. Commissioned portraits by artist Joseph Flores of Rochester will be unveiled.

Sunday morning October 20 the Gerrit Smith Estate National Historic Landmark (GSENHL) and the National Abolition Hall of Fame and Museum (NAHOF) will open early at 9:00 a.m. A tour of the GSENHL will be conducted by Norman K. Dann PhD at 9:30, and Jessica Clarke will conduct a tour of NAHOF at 10:30 a.m.

Peterboro’s recognition of the NYS Harriet Tubman 2013 Commemorative Year will include an afternoon of Tubman programs at the Smithfield Community Center:

The Peterboro United Methodist Church will offer a sandwich buffet on Saturday (reserve by October 7). The Deli on the Green (315-684-3131) in Peterboro is open with soups, sandwiches, and salads. The public is encouraged to participate. Walk-ins welcomed. Reservations needed only for sandwich buffet, anti-slavery dinner, and for Induction Package. Registration and reservation information is available at www.nationalabolitionhalloffameandmuseum.org, mercantile.gerritsmith.org, 315-684-3262.