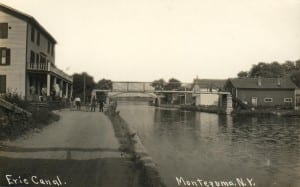 Since the mid- 1960’s. the idea of creating a park to celebrate the canal heritage of Montezuma New York has been tossed about. At the time, Town Supervisor Byron Lapp guided the purchase and consolidation of many acres of land located between the Seneca River and the hamlet of Montezuma. These acres, along with land owned by the State would eventually become the parkland.

The idea in the 60’s was to build a marina near the remains of the Montezuma or Seneca River Aqueduct. The idea was too big for the small community, and it was soon dropped. However, the land that had been acquired remained in Town hands.

In the first decade of the new century, the idea for a park was reborn. But this time, the plans were put forth with more modest ideas. The 160 acres would become a passive use park, built around the remains of the old Erie canal and canal era structures. Early on, the park was called the “Four Canals Park”, since the remains of the first and second Erie canals remain in good shape, as does a short section of the first Cayuga and Seneca canal. Add to this, the active Barge Canal, and the name Four Canals made sense. In fact, the idea that the Schoharie Crossing Park in Fort Hunter is the only place to see all three Erie canals is not right, as at Montezuma you can see all three plus the Cayuga and Seneca Canal. Soon, it was clear that even more stories could be found within the park, so the name was changed to the Montezuma Heritage Park. 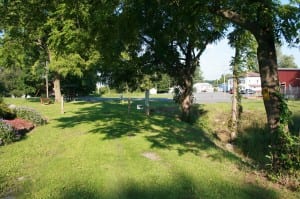 The towpath of the Enlarged Erie Canal forms the spine of the Park, starting at the Montezuma Hamlet and heading west to the remains of the second longest aqueduct on the canal. Along the walk, side trails head off to other canal sites, as well as some sites that show how people lived and worked around the Cayuga marshes. This becomes a selling point for the Park, as it nicely fits into the Cayuga Marshland narrative.

Everyone knows the story that the Montezuma Wildlife Refugee (MWR) tells, about preserving nature and offering views of migrating waterfowl. But the reason that the MWR had to be built was because man was working hard to drain and use the marshes. As the canals were built, State engineers were working hard to convert the marshland into productive farmland. Just the building of the Enlarged Canal changed the environment of the marshland. At the Montezuma Heritage Park, a person can see this work and gain a better understanding of the “conquest” of the marsh.

In addition to the Enlarged Erie remains, the Park has the well preserved remains of Cayuga Seneca Lock 11 and the junction of the Erie and Cayuga Seneca. Due to it’s out of the way location and since it has been sitting in water for all these years, Lock 11 is the finest remaining example of the eleven Cayuga Seneca locks.

Near to the lock, the basin for a two-bay drydock that serviced boats on the Enlarged Canal can be seen. And just by turning about, you can gaze upon 25 acres of recently acquired wetlands. Throughout the Park, the remains of the first Erie Canal can be found. The path of the old Erie can be followed toward the Seneca River where you can see what remains of a guard lock which separated the river from the canal.

One of the most fascinating places to visit is the remains of a small paper mill built near the river. In 1906, with few trees left to cut, businessmen turned to the Cayuga Marshes for cattails as a source of paper pulp. The business would not last 10 years, but the mill foundation helps to tell a story of how men used the swamps as a source for business. A trail leads to the top of the nearby drumlin, where the mill owners dug out the top of the small hill to serve as a reservoir.

The hamlet of Montezuma was one that rose and fell with the fortunes of the canal system. Although people had settled along the river years before the canal was dug up to their doorstep, the small settlement began to grow as it served as the western end of the new Erie in 1820. For a couple years, Montezuma was the end of the line, except for those who used the guard lock to enter the river and float west on the Seneca River. When the canal finally pushed through the wetlands, Montezuma became a typical small village along the canal. In 1828 the Cayuga Seneca Canal was joined to the Erie in the middle of the village. The hamlet would be dealt a death blow when the construction of the Barge Canal caused the old Erie to be abandoned.

What Montezuma is creating is a remarkable Park that will help to preserve the history of the canal system while telling the story of how men once looked to the wetlands as a source of commerce. The volunteers have created following websites and blogs to spread the word.