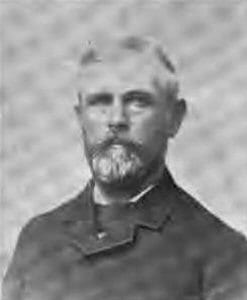 George Chahoon, a man who lived in the North Country for 60 years, mostly in Ausable Forks, was the focus of two of the most remarkable incidents in the Reconstruction Era following the Civil War.

When the South seceded, it had named Richmond, Virginia, as its capital city. During the post-war years, appointees chosen by the military were placed in power to guide the recovery. Then in 1868 George Chahoon, a native of Chenango County, but a Virginia resident for most of his 28 years, was installed as mayor of Richmond, replacing a popular leader who had served in the position for 15 years.

On January 26, 1870, President Grant signed the official act allowing Virginia’s readmission to the Union. Among the new laws passed by the Virginia legislature was one known as the “Enabling Act.” This law allowed the governor to appoint councilmen in any city (there were no town or city governments in place after defeat), and the councilmen were in turn tasked with appointing municipal officers, including mayors.

Upon rejoining the Union, Virginia’s leaders began enforcing the Enabling Act. When Chahoon’s two-year mayoral term ended in early 1870, he sought the position once again, but the Richmond city council had chosen Henry Ellyson, editor of the Richmond Dispatch, as the new city leader. An election was held, and Ellyson came out on top, but the situation was far from settled. In some districts where Chahoon enjoyed a wide following, the ballot boxes had been stolen. Claiming that this had skewed the results, Chahoon refused to leave office.

Thus developed the first of two remarkable incidents I mentioned earlier: Richmond had two mayors, which resulted in national attention as a sort of new “civil war” broke out within the city.

Many Southerners retained a deep hatred for anything linked to the North, and though Chahoon was liked by many, his strongest support was among the city’s black population. Ellyson, on the other hand, was known informally as the “white candidate.” The two sides issued frequent statements and threats, and some of the threats were acted upon.

Violence, including fighting in the streets, led to deaths on both sides and a number of serious injuries. For weeks on end, the city was on the verge of erupting into total chaos. Ellyson put the squeeze on Chahoon and his followers, blocking all access to the building they were in and severing all utilities, hoping to starve them out. At times, both mayors attempted to have their opponents arrested, and the situation soon became intolerable. Finally, the two men agreed to place the issue in the hands of the Virginia Supreme Court and to abide by their decision.

In their wildest imagination, no one could have foreseen the various outcomes, one of which had nothing to do with the mayoral decision. That may sound as if it makes no sense, but here’s what happened.

The dispute inadvertently led to one of the greatest tragedies in Richmond’s long history (the second remarkable incident referred to earlier). As the nation watched, hundreds of lawyers, politicians, lawmen, and reporters, in fervent anticipation of the high court’s ruling, crammed the courtroom on the upper floor of Richmond’s Capitol building. The buzz among attendees grew into a low roar, with the excitement building as judges prepared to take their seats at the far end of the room.

The electrified atmosphere was suddenly interrupted by a loud sound, likened by one writer to a muffled gunshot, partially quieting the crowd and drawing everyone’s attention. A second noise, more of a cracking sound, caused all attendees to look about in wonder. Many quickly rose to flee, but in an instant, the entire floor collapsed beneath them.

Chaos ensued. Some managed to clutch windows or curtains and were left suspended in the air, a fate far preferable to what befell so many others. Hundreds of people, both Chahoon and Ellyson among them, plummeted more than twenty feet to the level below. Desks, chairs, and other debris fell upon them, followed by the ceiling from high above, causing incredible destruction. 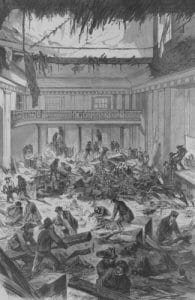 Body parts protruded everywhere from the wreckage as rescue workers arrived to begin helping the injured and recovering the dead. Worse off than those who fell were a number of people in the chamber below, who had little chance for survival. In the end, the carnage proved substantial and horrible: between 60 and 70 people died, and 100 to 250 were injured (accounts vary widely). It took three straight days of funerals to bury the dead from what remains one of the worst calamities in Richmond’s history.

Ellyson was unhurt, and Chahoon suffered only minor injuries. A few days after the catastrophe, the court ruled against Chahoon, but that proved to be just the beginning of his troubles. A replacement candidate for Ellyson assumed the mayorship, and soon after, Chahoon was charged with forgery in a real estate case. He claimed it was politics, but there was some strong evidence presented against him.

The chaotic years of Reconstruction left behind three quite different versions of the outcome of Chahoon’s case. Southern newspapers proudly proclaim that he was found guilty and sentenced to four years in prison. Thereafter, he was banned from the state and branded as a Northern Carpetbagger, even though the bulk of his life to that point had been spent living in Virginia.

Northern newspapers generally referred to Chahoon as the former military mayor of Richmond who went on to a very successful career in the papermaking business and as a politician, serving three terms in the New York Senate, where he represented the district encompassing Clinton, Essex, and Warren Counties. No mention was offered of his trouble in Virginia’s court system.

The third version of the story (all three contain truths) provides facts on the court case against Chahoon and comments from the man himself. In his initial trial, he was found guilty and sentenced to four years in prison, but won the right to appeal. A second trial also produced a guilty verdict. The case was presented for a third time, in this instance before Virginia’s highest court, which confirmed Chahoon’s guilt.

There were many unusual facets to the case, including a key witness (in the first trial) expected to corroborate Chahoon’s story and thus prove his innocence. Instead, the witness stunned observers by taking the stand and testifying to his guilt.

After the third trial, Chahoon’s sentenced was reduced to two years in state prison. Following six months in the Richmond jail (actually in an attached apartment with more comfortable accommodations) awaiting the results of another appeal, Chahoon was pardoned by the governor, with the stipulation that he leave Virginia, which he did. Despite that ruling, he returned in the future to visit friends.

Chahoon moved to New York, and while living briefly in Poughkeepsie, wrote a letter to the Richmond Journal, offering a defense of his innocence and accusing the judge and jury of dereliction. He noted that at the end of his last trial, the Southern Democratic jury punished the Northern Republican (Chahoon), but didn’t truly believe his guilt, as evidenced by their recommendation of executive clemency.

Southern history records a quite different account of the incident compared to Northern versions, making it very difficult to discern the facts. I have to say, thank goodness such enmity has faded and our politicians and media get along just fine today!

At any rate, Chahoon put behind him what is sometimes referred to as the “Richmond Imbroglio” and moved on to northern New York, where he spent the next several decades involved in politics. He also attained great financial wealth in connection with the J&J Rogers Company (his first wife was the daughter of owner James Rogers).

Chahoon served three terms as a New York State senator and was routinely named a delegate to state and national conventions. He spent the remainder of his life in Albany, Glens Falls, and primarily in Ausable Forks, where he died in 1934 at the age of 94. The entire J & J Rogers Company shut down for the day so that hundreds of employees could attend his funeral.