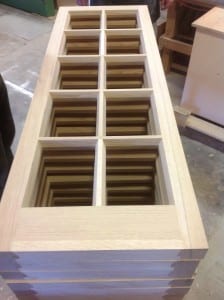 Fort Ticonderoga has received a grant from the French Heritage Society to underwrite restoration work on the Fort’s Soldiers’ Barracks.  The grant was given to Fort Ticonderoga, originally named Fort Carillon in 1755, because of its historic significance as a French heritage site. The project will replace 80 year old windows and sills on the third floor of the Soldiers’ Barracks. Restoration work is currently underway with the windows expected to be installed by the spring of 2014.

The restoration of Fort Ticonderoga was launched in the spring of 1909 by Stephen H.P. and Sarah G.T. Pell and is the earliest restoration of a major historic site in America.  It is a project that transformed American preservation thinking in the early 20th century.  The monumental restoration began with reconstruction of the Officers’ Barracks, western wall and bastions and the Pells simultaneously started assembling a world-renowned collection of 18th-century military objects and archives.

The museum formally opened to the public in 1910 and as collections quickly grew, exhibitions were expanded into the Soldiers’ Barracks reconstructed in 1930-1931.  Over the next decade the restoration continued completing the northern and eastern walls of the Fort by the early 1940s.  The most recent reconstruction, the magasin du Roi, (the Deborah Clarke Mars Education Center) was completed in 2008.

French Heritage Society is dedicated to protecting the French architectural legacy both in France and the United States with particular emphasis on raising funds for preservation and education. The society fosters long-established French-American relationships through cultural exchanges as it strives to ensure that the treasures of our shared heritage will survive to inspire future generations. Its thirteen chapters in the US and one in Paris have supported the restoration of nearly 500 buildings and gardens since 1982. French Heritage Society also organizes unique student internship opportunities in both countries and offers enriching cultural trips in France and the US for its members.