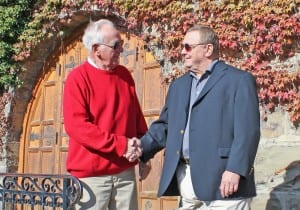 The Finger Lakes Boating Museum has announced that they will be locating at the south end of Keuka Lake in the Village of Hammondsport, Town of Urbana, Steuben County.

Mercury Aircraft, which operates in Hammondsport, owns the former Taylor Wine Co. buildings located just south of the Village of Hammondsport on Pleasant Valley Road. The president of Mercury, Joseph “Bud” Meade III, is making a 14-acre parcel available to the Boating Museum.

“We are excited to be working on the permanent home for the Museum,” said Ed Wightman, President of the Board of Trustees. “We enthusiastically look forward to being an effective and worthy part of the community.”

Wightman and Meade met Thursday, Oct. 24, at the site to formalize the deal. Wightman conveyed to Meade a letter from the Museum Board of Trustees confirming the board’s acceptance of Mercury’s offer. “The Trustees extend to you (Meade) their sincerest appreciation for your generosity in making this property and its buildings available to the Museum,” the letter stated.

Mercury’s donation of property includes the 30,000-square-foot storage building where the Museum’s collection of boats and related artifacts is now housed. The main building of the complex served as the Taylor headquarters and is a four-story building of 32,000 square feet.

Mercury has subdivided this property from its larger holdings in preparation to convey to the Boating Museum, which is in the process of applying to the Town of Urbana Planning Board for a use change from wine making to museum.

The Boating Museum also plans to make application to the Town of Urbana for lakefront presence and use in the Town-owned Champlin Beach at the head of Keuka Lake. Wightman said preliminary and positive conversations have been held with members of the Town Council.

Wightman explained that the Boating Museum began looking for potential sites after withdrawing from a partnership with the City of Geneva when the Museum Board came to the realization that the City did not intend to continue with the museum project. The Board’s Site Selection Committee recommended the Hammondsport location and the Trustees approved going ahead with the project at their Oct. 8 meeting.

The Boating Museum has assembled a collection of more than 100 wooden boats built in the Finger Lakes over the past 100 years, as well as numerous related artifacts and extensive reference material. Education, restoration and preservation are the key elements of the museum’s mission.

The boating museum is a 501c3 not-for-profit corporation and was chartered by the New York State Department of Education in 1997 to “research, document, preserve and share the boating history of the Finger Lakes region.”