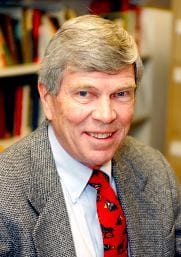 Each year the Archives Partnership Trust recognizes the outstanding contribution by a national figure to advance the understanding and uses of history in society at the Empire State Archives and History Award program.

This year’s program will honor Pulitzer Prize-winning author Dr. James McPherson with a conversation between McPherson and prominent Lincoln scholar Harold Holzer. McPherson will talk about his research, Civil War history, national history, and his long career as a historian.

James M. McPherson, PhD, an American Civil War expert and one of the most distinguished historians of our time, was awarded the Pulitzer Prize in 1989 for Battle Cry of Freedom: The Civil War Era.  An active preservationist, he has served on the Civil War Sites Advisory Commission since 1991. Dr. McPherson was named the Jefferson Lecturer in the Humanities for 2000 by the National Endowment for the Humanities. He transferred to emeritus status at Princeton in 2004 as the George Henry Davis 1886 Professor of American History, Emeritus and in 2007 was the recipient of the first Pritzker Military Library Literature Award for Lifetime Achievement in Military Writing.

Readers can win two tickets to a “Conversation with Pulitzer Prize-winning author Dr. James McPherson” on Thursday, November 7 at The Egg, Albany, NY by visiting the New York State Archives Facebook page at  https://www.facebook.com/nysarchives and “like” the post about the event.