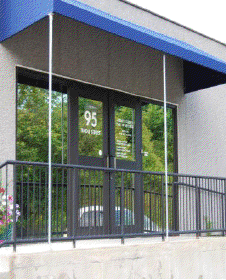 In recognition of Archives Month and in celebration of Albany County’s 330th Anniversary there will be an Open House at the Albany County Hall of Records to see an exhibit of Albany’s earliest records on Thursday, October 31, 2013, from 10AM to 12 noon.

The highlight of the exhibits on display will be the Dongan Charter, the original charter that made Albany a city in 1686.  Although the charter is faded, the signature of Governor Thomas Dongan is still visible at the bottom of the last page, as is Dongan’s seal which is attached to the page with red wax and a tan and blue cord.

Also on display will be The Fort Orange Minutes, 1652-1660, a Deed book with transactions between the early Dutch settlers and the Indians, Farm Surveys of lands in the Rensselaerswijck Manor (now Albany and Rensselaer Counties), and the Proceedings of the Board of Supervisors, 1781-1788.  There is also a permanent exhibit on John Randel, noted surveyor and cartographer, who planned the grid layout of Manhattan Island and created our beautiful Post Road Map between Albany and New York City in 1810.

Albany County grew out of Indian land that was first settled by the Dutch, then conquered by the British and later populated by many other national groups.  Names of towns and cities that comprised the county in 1683 run an ethnic gamut:  Albany, Rensselaerswijck, Watervliet, Bethlehem, Schenectady, Kinderhook, Schaghticoke, Livingston Manor, Saratoga, Hoosick, Great Imboght, Catskill, Coxsackie, Schoharie, Claverack, King’s District, German Camp and Cambridge.

On November 1, 1683, “An Act to divide this province & dependencys into shires and Countys” was passed by Royal Governor Thomas Dongan and the New York Colonial Assembly.  This Act, Chapter 4 of the “Dongan laws” was responsible for creating Albany County, along with 11 other counties, in the Province of New York.  Albany County then contained the entire upper region of New York, but by 1808, various counties were formed from lands in Albany County and Albany County assumed its current borders.

On Sunday, November 3, 2013, 11AM to 4PM, the Hall of Records’ exhibit will move to the Times Union Arena where it will join the Live Life Local celebration of Albany’s 330th Anniversary.  (In keeping with archival practice to preserve this special treasure, they will substitute a digitized photograph of the Dongan Charter at the arena exhibit.)

The Albany County Hall of Records is located at 95 Tivoli Street, Albany, NY 12207.  For more information contact Jill Brothers at (518)487-5146 or jbrothers@albanycounty.com.