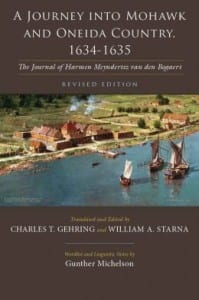 Harmen Meyndertsz van den Bogaert led the expedition from Fort Orange (present-day Albany). His journal includes the earliest known description of the interior of what is today New York State and its seventeenth-century native inhabitants and it is now issued in a revised edition as A Journey into Mohawk and Oneida Country, 1634-1635: The Journal of Harmen Meyndertsz van den Bogaert (Syracuse Univ. Press, 2013; Translated and Edited by Charles T. Gehring and William A. Starna).

Van den Bogaert was a keen observer, and his journal is not only a daily log of where the expedition party traveled; it is also a detailed account of the Mohawks and the Oneidas: the settlements, modes of subsistence, and healing rituals. Van den Bogaert’s extraordinary wordlist is the earliest known recorded vocabulary of the Mohawk language.

Gunther Michelson’s additions to the wordlist of Mohawk equivalents with English glosses (wherever possible) and his expert analysis of the language in the Native American passages offer a valuable new dimension to this edition of the journal.

Charles T. Gehring is director of the New Netherland Research Center. He has been a fellow of the Holland Society of New York since 1979. In 1994, Her Majesty Queen Beatrix of the Netherlands conferred on him a knighthood as officer in the Order of Orange-Nassau.

William A. Starna is professor emeritus of anthropology at the State University of New York College at Oneonta and adjunct professor emeritus of geography, Queen’s University, Kingston, Ontario. He is the author of numerous articles and books, including From Homeland to New Land: A History of the Mahican Indians, 1600–1830. Gunther Michelson (1924–2005) was an expert in the Mohawk language and its documentation in historical sources.