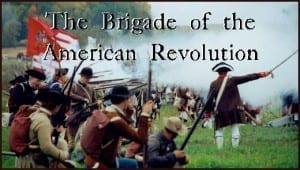 Celebrating its 75th anniversary year, Saratoga National Historical Park (located on Routes 32 and 4 in Stillwater) will present a grand-scale encampment and tactical demonstration of the 1777 Battles of Saratoga on Saturday and Sunday, September 21-22.

American and British camps with 250 living-history volunteers will be opened on Saturday from 9:00AM to 5:00PM and on Sunday from 10:00AM to 3:30PM.  Weekend events are free.

On Saturday all visitors will be transported through the park by a free shuttle bus (no large coolers, no pets) to the American and British camps, and the main event – a large tactical display of the first Battle of Saratoga.  To witness this grand event, visitors must arrive at the shuttle bus (Duell Rd, just 2 miles north of the park) by 1pm. Visitors with handicap stickers may drive directly through the park. For information about the shuttle and call 670-2980 or visit www.nps.gov/sara

Living history volunteers from the Brigade of the American Revolution www.brigade.org will portray American Continental and militia soldiers, British, German and Loyalist soldiers, and women and children army followers.  Setting the large-scale scene with cannons, muskets and rifles, tents, camp cooking, and horses, they will offer many activities.  Visitors may join a British or American army worship service, go on a scouting mission to find enemy troops, take part in musket drills, judge an American army court martial, learn a special recipe, or meet Generals John Burgoyne and Benedict Arnold.

There will also be a reservation-only 45-minute night hike at 7pm on Saturday though fire-lit camps as volunteers portray scenarios from the night after battle. Tours are limited and by preregistration only; please call the park at 664-9821 ext 1777 by September 16.

In addition to the weekend encampment, on Sunday at 2:00PM, the Sons of the American Revolution and Daughters of the American Revolution will have a special wreath-laying at Stop 2.  The public is welcome to attend this commemorative event.  For more information, please call the Visitor Center at 518-664-9821 ext.1777, check the park website at www.nps.gov/sara or follow us on Facebook at www.facebook.com/saratoganhp