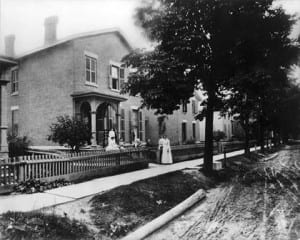 The only living witness to Susan B. Anthony’s life is a 150 year-old Horse Chestnut Tree that still shades her family’s front yard in Rochester, N.Y.  It personifies the gutsy woman people called Aunt Susan who loved her home and devoted her life to fighting for women’s rights and suffrage. The Tree has received a “Hero of Horticulture” award from The Cultural Landscape Foundation (http://tclf.org). “Hero” Trees are associated with great people and significant moments in American history.

Back when the vision of women voting seemed an impossible dream, Susan B. Anthony endured hardship and ridicule while waging a tireless campaign for gender equality. Her heart stayed home, however, along with her roots. Anthony personally defended the Horse Chestnut Tree against threats from a road project. Now its rustling leaves resonate in the hearts of visitors to the National Susan B. Anthony Museum and House. (www.susanbanthonyhouse.org) 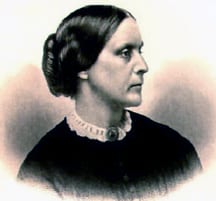 Susan B. Anthony was born in Adams, Massachusetts in 1820 and was raised with an activist approach to justice and equality. When her parents moved to Rochester in 1866, their house at 17 Madison Street became Anthony’s home during the most productive years of her life. The Horse Chestnut Tree, planted circa 1869, appears unimposing in an 1891 photograph of Miss Anthony and other suffragists gathered on the lawn. Today it stands 65 feet tall.

The streets of Rochester were paved and curbed from 1890 to 1900, and roadside trees usually died in the process. According to oral history, Anthony insisted that the curb in front of her house be rerouted to prevent damage to her Horse Chestnut. Its survival to this day is remarkable despite the careful monitoring bestowed upon it now by the City of Rochester. Recently, a City employee was so moved by Anthony’s beloved tree that he became teary-eyed while removing a plastic bag from a branch, according to Deborah L. Hughes, President and C.E.O. of the National Susan B. Anthony Museum and House.

“The tree’s health is a matter of ongoing attention,” Hughes said. “It had some trauma and has endured much. Once it was filled with foam. There were no chestnuts last year, which concerns us. Last year a branch fell off, breaking the fence. Fortunately, it suffered only minor damage from Hurricane Sandy,” she said, adding, “It’s still intermittently threatened by highway projects. The greatest threat would result from lack of appreciation of history.”

The graceful, dancing shadows of the Horse Chestnut were often noted in the attic room where Anthony spent untold hours meeting with journalists and working with biographer Ida Husted Harper. “It was peaceful and still up there,” Harper wrote in the resultant 3-volume biography, The Life and Work of Susan B. Anthony, quoting an unnamed visitor. “The sun flickered through the trees into the windows and lay upon the old volumes neatly piled. They recorded fifty years of fighting against injustice; fifty years of working for equal rights; fifty years of constancy of purpose….”

Harper noted that a reporter from Rochester’s daily newspaper also mentioned trees surrounding the Anthony house. He described the third floor work area as “two large and airy rooms that appear to be perched literally in the tree-tops—so close are the swaying branches which seem to nod approval and encouragement to the two busy workers seated before a large bow window.”

The “Heroes of Horticulture” photography exhibit in Washington, D.C. was organized by TCLF and the George Eastman International Museum of Photography and Film. The TCLF “Landslide Initiative” begun in 2004 brings attention to threatened landscapes that are important to history. The Initiative (http://tclf.org/landslide) produces a yearly thematic compendium of threatened and at-risk sites, as well as monthly features highlighting other threatened landscapes, and provides updates about past Landslide sites.

More than 100 years after SBA’s death at home in 1906, the tree remains the only living witness to Aunt Susan’s life and provides a current spiritual connection that has been reported by visitors to the Anthony house and museum.  This spring the remarkable tree bore flowers on one limb while bearing just leaves on the other, Hughes said. It’s a blooming pattern that invites creative interpretation.