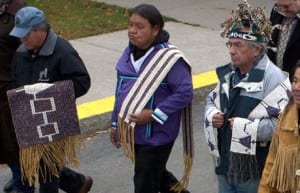 The historic journey of Two Row Wampum is in the news. The journey by water from Albany to the United Nations has been recorded and chronicled each step of the way.

The culminating activity at the conclusion of the journey is to honor the International Day of the World’s Indigenous Peoples. The paddlers consist of roughly equal numbers of Indigenous and non-Indigenous peoples, paddling side-by-side in two lines to honor and bring to life the imagery of the Two Row Wampum.

The Two Row Wampum Quadricentennial celebrates the first treaty between the Haudenosaunee (or Iroquois Confederacy) and the first settlers (the Dutch). It teaches people how to coexist in peace and friendship, respect sovereignty, and share the responsibility to take care of the environment. The Haudenosaunee have kept the treaty, while it has been largely forgotten by Americans, even though both the English and American governments adopted its protocols.

“The words ‘as long as the sun shines, as long as the waters flow downhill, and as long as the grass grows green’ can be found in many treaties after the 1613 treaty. It set a relationship of equity and peace. This campaign is to remind people of the importance of the agreements”

The past, of course, isn’t dead; it isn’t even past. Andy Mager, the Project Coordinator for the campaign and a member of Neighbors of the Onondaga Nation, explains:

“This treaty is not just about the past, it is about the future as well. Article 6 of the U.S. Constitution states that treaties are the supreme law of the land. Understanding and honoring the Two Row Wampum can improve relations between our peoples and remind us of our responsibilities to the Earth which we all share. We need this now more than ever.”

At first glance, the press release and the event appear to be expressing a wonderful story of the message of peace, friendship, respect, and ecology being brought to the United Nations. However, for historians, the event poses a challenge. One can be for peace, friendship, respect, and ecology without necessarily accepting the validity of the Two Row Wampum Quadricentennial as historical. The investigation into the treaty raises serious questions about its underlying truth. One needs to separate one’s attitude towards the message in the present from what actually happened which can be a difficult challenge.

I can only provide my professional opinion as to the so-called Tawagonshi Treaty, allegedly written in 1613 by the Dutch traders Jacob Eelckens and Hendrick Christiaenssen. Together with my colleagues Jan Noordegraaf, Free University, Amsterdam, and Harrie Hermkens, retired from Fontys University of Applied Sciences, Tilburg, I have studied the text of the treaty. We have come to the conclusion that this text cannot have been written in 1613 because it contains more than 40 anachronisms: Word forms, word combinations or word meanings that were not in use in the early 17th century.

There is linguistic evidence that indicates the text of the treaty was written in the 20th century. We hope to publish our findings in the Journal of Early American History. Our conclusion that the Tawagonshi Treaty is a fake confirms the claim made by Charles Gehring, William Starna and William Fenton in 1987.

The article in question is “The Tawagonshi Treaty of 1613: The Final Chapter” (New York History, October 1987:373-393) by Gehring, Starna, and Fenton. They described the appearance of the treaty in 1968 due to the efforts of L. G. Van Loon under undocumented circumstances. The article recounts the difficulties Van Loon had getting the treaty between private individuals (not the government) and the Mohawk, not the Mohican who were the actual people living in the area, validated as an historical document.

The use of place-names of abandoned towns of the Wolf, Bear, and Turtle clans, clan totems affixed next to the Indian names which was a practice of the English not the Dutch in treaty signings, spellings and expressions which hadn’t been invented by 1613 compounded the difficulty for van Loon in having the treaty authenticated.

Four fraudulent documents which he also sought to pass off as valid didn’t help his cause either. And the fact that the same person seemed to have written all five documents with a handwriting that matched van Loon’s didn’t help his cause. He cited one source for his childhood development of proficiency in Hudson Valley Dutch to stories he heard from Mrs Dewitt Lynck of Glenville Village, NY, who turned out to be Mary Jane Lowe under her maiden name of Scotch ancestry and a non-Dutch speaker.

The quandary is the event promoted as a spectacular summer tourist event may rest on a faulty historical foundation. This also highlights the different goals of the tourism departments from the history. Naturally there is also the risk in these instances that criticizing the facts will result in the response that you are opposed to the message in the present which may or may not be true.

The issue raised by Two Row Wampum extends to other events as well. The way history is presented frequently creates tension between the facts on the ground and the message the presenter wants to deliver.

For example, several weeks ago, it was revealed that the iconic photograph of the firefighters raising the American flag at Ground Zero almost didn’t make the cut for display at the 9/11 Memorial Museum. According to Elizabeth Greenspan, author of Battle for Ground Zero to be released shortly, Michael Shulan, the museum’s creative director, was among staffers who considered the Tom Franklin photograph too kitschy and “rah-rah America” to be shown. “I really believe that the way America will look best, the way we can really do best, is to not be Americans so vigilantly and so vehemently,” Shulan to Melissa Klein of the New York Post. In other words, what makes America exceptional is that it doesn’t take pride in its citizens rising to the occasion in a moment of great adversity. Interestingly the New York Times did not consider this story as news fit to print but it may be waiting for the publication of the book before commenting on the issue.

Here is how one historical society was just criticized for its whitewashed storytelling:

The New-York Historical Society’s current exhibition “AIDS in New York: The First Five Years” accomplishes a neat trick: it takes a black mark in New York City’s history…and transform it into a moment of civic pride, when New Yorkers of all stripes came together to fight the disease. It’s a lovely story, if only it were true… Bad history has consequences. (Hugh Ryan, “How to Whitewash a Plague,” NYT 8/4/13).

[David] Coleman [president College Board] has made known his discomfort with the essay [portion of the SAT test], which places no premium on accuracy. Students can get top marks for declaring that the Declaration of Independence was written by Justin Biber and sparked the French Revolution, as long as the well organized and develops a point of view. “We should not be encouraging students to make up facts. We should be asking them to construct an argument supported by their best evidence.” (Tamar Lewin, “Sneak Preview: What the New SAT and Digital ACT Might Look Like,” NYT 8/4/13)

Each of these examples, Two Row Wampum, the 9/11 Memorial Museum, the New-York Historical Society, and the SAT highlight the same issue: the conflict between historical inquiry into what really happened and the desire to communicate a preferred message in the present. Whether the truth is whitewashed, the student is free to make up the truth as long as it is well reasoned, or only “acceptable” messages are exhibited, history in the traditional academic sense pays the price. Although each of the incidents mentioned here is not the same, collectively they point to a common problem. As Clifton Patrick, Town of Chester historian wrote on NYHIST-L@listserv.nysed.gov on Aug 13, 2013,

Daniel Patrick Moynihan said we are entitled to our own opinions but not to our own facts. Perhaps the lesson to be learned is that he was wrong.