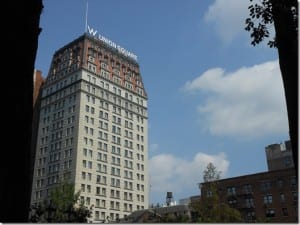 You may have noticed that the Real Estate Board of New York (REBNY) have been making some noise lately about how much of Lower Manhattan has landmark protection. This is really no surprise to anyone who has been paying any attention for the past 50 years – Lower Manhattan includes some of New York City’s oldest concentrations of historic architecture and strong communities who have invested a lot of time, energy and money in maintaining, protecting and revitalizing them.

No one could honestly say that SoHo, Tribeca, or Greenwich Village have not prospered since designation, which in some cases has been in effect since the 1970’s. What is startling about REBNY’s argument against historic neighborhoods is how long they’ve been singing the same tune.

In 1965, John R. O’Donoghue, the executive secretary of the owners division of REBNY, told The New York Times the Landmarks Law will “seriously impede the modern expansion and progress of the city.” The last 48 years of development certainly doesn’t seem to agree with that particular prophesy.

In fact, for an organization which is “concerned with the expansion of New York’s economy by encouraging the development and renovation of commercial and residential real property in order to enhance the city’s appeal to investors and residents”, REBNY seems to have a remarkable blind spot towards the positive effects of landmark designation. In 1988, President Steven Spinola said (in testimony on the proposed Central Park West Historic District):

“I’m sure it will come as no surprise when I say the Board opposes the creation of the proposed Central Park West Historic District. We are often criticized for our unwillingness to accept historic districts. And it’s true, that in the past we have opposed, rather than supported, most districts. Our opposition really began with the Upper East Side Historic District, and has continued to the other large districts such as Ladies’ Mile and this one. And our opposition will continue, as long as we believe that historic districts are proposed as development control mechanisms.”

True to his word, their opposition has continued to this day.

We find it bewildering that anyone honestly claims that landmark designation destroys property values when a tiny parcel of land in the SoHo Historic District, only big enough for a fruit stand, sells for $26 million?   We’re flummoxed by the charge of landmarks obstructionism when even regulated architects think it improves projects. We shake our head at cries of loss of jobs when contractors and building professionals say designation is good for business, and we honestly just don’t know what to do with the accusations of government overreach when New Yorkers spend years trying to gain landmark status. But maybe that’s just us. Evidently, that’s how REBNY sees the world. They objected to landmark designation in 1965 and they object to it now. Everyone is entitled to their own opinion but it’s not really a surprise and it certainly isn’t news.

You can help support the Historic District’s opposition to REBNY’s assault on the Landmarks Law here.

Photo: The W Hotel in Union Square, Manhattan. One of the many successes of the Landmark Law and historic preservation. Photo courtesy Ric Garrido.