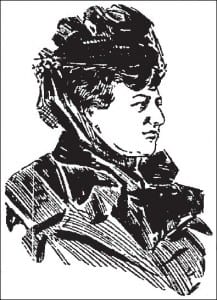 Charlotte Smith of St. Lawrence County was a women’s rights activist with few equals. From the 1870s through the turn of the century, she was among the most famous and visible women in America, battling endlessly for anything and everything that might improve the status of women. No matter what the issue―unemployment, unfair treatment in hiring, deadbeat dads, the plight of single mothers―Charlotte was on the front lines, fearlessly facing down politicians at all levels.

In the 1890s, she also staked out some positions that appeared difficult to defend, but Smith’s single-mindedness gave her the impetus to continue. The bane of women in America held her attention for years, but in modern times, it’s unlikely that any of us would guess its identity based on Charlotte’s description.

A sampling of her comments: “… it’s a great curse inflicted upon the people of this country; 75 percent of participants will be an army of invalids within the next ten years; it brings on the most appalling diseases among young women; it swells the ranks of reckless girls and outcast women; it will prevent motherhood; and it’s the devil’s advance agent, morally and physically, in thousands of instances.”

A century later, we might think she was referring to HIV, but what could have gotten her so stirred up in the 1890s to launch such a high-profile crusade and make speech after speech on the subject? 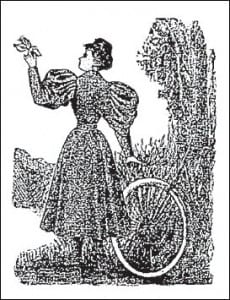 In learning it, there’s a risk you’ll dismiss all the wonderful work done by this relentless defender of women’s rights. But it is part of her story, so here goes: it was the dreaded bicycle.

Yes, the bicycle was, in other Smith commentary, “… causing immoral associations both in language and dress … and making women not only unwomanly, but immodest as well … luring young girls into paths that lead directly to sin.”

In Charlotte’s nineteenth-century world, women were still generally perceived as frail objects and homebodies that needed to be taken care of. Outside of the home, they were often taken advantage of by unscrupulous and dastardly men. Maybe it was those racy American bicycle skirts. At a few inches above the ankle, they were regarded by the British as a scandalous breach of feminine propriety.

The increase in “fallen women” in those days was due to many factors, said Smith, including newfound mobility, courtesy of an increasingly popular mode of transportation―again, the bicycle. Cycling presented many opportunities for women to get away from home and mix with other people, leading to all manner of problems, as Smith saw it. Her own studies of the situation cited the bicycle as a key element in the downslide of many women’s lives, which in turn made it her duty to attack it as such.

In the late 1890s, while still maligning the cycling world, Charlotte took on another controversial position: taxing all bachelors and old maids. As crazy as that might sound, there was reasoning behind it, based on people’s responsibility to society.

If you’re old enough, you might recall long-ago references to old maids. Societal standards for much of American history called for everyone to marry. Old maids and bachelors were often looked upon with pity or scorn. They were also perceived as financial burdens to the public. Without children to care for them in old age, the allocation of government funds was required for their support.

Smith took the anti-bachelor idea one step further. “I certainly believe in compulsory marriage law. Every man and woman should be married. The majority of social evils are due to the fact that it seems to have become the custom … to escape marriage, if possible.”

Smith wanted old maids added to the proposed bachelor-tax bill in New Jersey. The revenue would be used to pay for the care “of decrepit old bachelors who are more than three score.” That way, the unmarrieds of both sexes would be held responsible for their own care, a job normally shouldered by family members.

Charlotte had once been married, and some said with a wink that her argument was rooted in the adage, “Misery loves company.” But as wild as the idea seemed, she wasn’t alone in her thinking. A survey revealed some surprising results. One minister fully agreed with Smith’s views, referring to bachelors as “fruitless trees.”

The editor of Women’s Weekly said, “I think the bachelors should be taxed by all means, but how an old maid can help herself is a mystery to me. I have tried for many years to find a man willing to stand for even a short time my many crankinesses, but so far have been cruelly left to fight my own battles, pay my own taxes, and obey laws in the making of which I have no voice.”

One of Charlotte’s arguments has perhaps been true throughout history: “Marriage has a civilizing effect on a man.” Disagreeing, but with a sense of humor, was a group of prominent young Atlanta men who formed a bachelor’s group with their own rules: any member who married was subject to a $1000 fine. Other members would attend the offender’s wedding dressed in black funeral garb, “wearing mournful faces … and emitting groans during the ceremony.” Once the fine was paid, the married member was declared legally dead.

Comic components also applied to another issue. In 1898, when war with Spain was imminent, Charlotte, perhaps with a wink herself, publicly demanded that the government “enlist 50,000 women volunteers within 30 days.” They would, she said, “give the Spanish nation a sound thrashing.”

Smith’s comments led to some quick and humorous responses from male editors. Said one: “We fail to understand why Boston (where she did much work) should fear bombardment by the Spanish fleet after submitting to Charlotte Smith for eleven or twelve months.” Another, presumably married, chimed in anonymously on the idea of sending women into battle: “When this nation goes to war, it does not stoop to such barbarous methods.” Now that’s funny.

Whatever the battle, it was surely good to have St. Lawrence County’s stalwart defender of women’s rights on your side. Intelligent, funny, caring, and persistent, she was a woman before her time, addressing issues 140 years ago that are still relevant today.