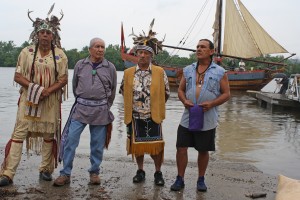 “We need a global solution. We need to set aside our differences. Our leaders are not paying attention. Washington is filled with millionaires. What the hell do they care? They are out of touch. We are losing time. Now is the time for people to come together and act to protect and heal our environment. If we do not act now no matter what we do it will be too late.” said Oren Lyons, a member of the National Council of Chiefs and the Faith Keeper of the Onondaga, standing on the shores of the Hudson River on a overcast Sunday morning to the hundreds of people gathered.

Four hundred years ago the Dutch and the Iroquois, the Haunensaunee or the “People of the Long House”, the league of five nations of indigenous people known as the Mohawk, Oneida, Onondaga, Cayuga and Seneca, made an agreement to live and trade in harmony, and to respect and care for the natural environment, an agreement symbolized by a two row wampum belt.

Wampum belts are made of beads crafted from the white channeled whelk shells and the darker, purplish, quahog clam shells, woven together in specific patterns, and used to commemorate treaties and other major events as well as personal transactions.

The wampum belt used to commemorate this transaction no longer exists, nor do the Dutch have any historical written document that attests to its creation, but it has been firmly established for hundreds of years in the oral tradition of the Iroquois and the now six nations that make up their confederacy (the Tuscarora joined in 1722), and, of consequence, much weight is given to the authenticity of such an agreement though the exact date and locale is not known. 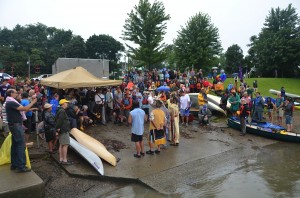 What is believed is that one row of the wampum shells signified the Dutch and the other the Iroquois, lined together as equal partners in this agreement, and manifested by a line of canoes paddled by the Iroquois and a Dutch ship sailing on a parallel course on the Hudson River. The agreement took place where the Normanskill Creek joins the Hudson, a location of special interest to me as my ancestor Pieter Claesen, the first Wyckoff in America, a 13-year old boy and indentured servant to the Rensselaers, lived and worked on a farm directly opposite.

Unlike the English, as exemplified by the Massachusetts and Jamestown colonies, the Dutch had no particular interest in driving the Indians off their lands, rather they agreed to live and trade together, famously symbolized by the “purchase” of Manhattan for 60 Dutch guilders ($24), which in fact was not a purchase, but like the earlier two row wampum, an agreement for harmony and trade. The Dutch established Fort Orange (Albany), New Amsterdam (New York City) and other settlements for trading purposes. They had no desire to trap beaver themselves thus they sought a long-term trade agreements that would be viewed as equally beneficial to both sides, and they valued keeping the land healthy and productive. A good source is Russell Shorto’s book The Island in the Center of the World: The Epic Story of Dutch Manhattan and the Forgotten Colony that Shaped America.

The Iroquois view the two wampum agreement as one of the few ever truly honored and kept by the Europeans, and further they believe that the spirit of that agreement has never been more needed than today – that the challenges faced by climate change, the destructive pollution of the planet, increasing economic disparities, and issues of social injustice can only be addressed if people come together as equals, indigenous and non-indigenous, people of differing faith/spiritual traditions, political, social, cultural and other beliefs – and that it is critical we do so now.

The voyage to commemorate the 400th anniversary began on July 4th at the Gibson Street bridge in the Onondaga Nation when a small flotilla of canoes and kayaks set out first for Onondaga Lake, then to cross it, connect with the Mohawk, and paddle to Rensselaer by July 25th for a commemoration of the two-wampum treaty. From there they continued on to New York City arriving on August 9th presenting a copy of the belt and a peace pipe to the Dutch Consul-General Rob de Vos, and then walked across Manhattan to attend a world indigenous people’s day at the UN.

Along the way a series of educational events were held as a means of drawing attention to this treaty, the importance of its message, and to serve as a call for action. Throughout the voyage the paddlers paddled in two parallel lines, one of indigenous peoples and the other non-indigenous peoples. While the number of canoeists was relatively modest at the beginning, nearly 250 left Albany and continued to the city.

“I am part of the six nations,” said paddler Alan White of the Cayuga Nation. “Our people follow the spiritual way. This wampum belt is a very powerful. The message is not to change or add to anything that was not here in the beginning – to protect our environment and not pollute it as we have done. Its message is to live together in peace. I feel real good about being able to paddle the river like our ancestors did with our non-native friends.”

“I am a member of the steering committee,” said Dan Hill of the Cayuga Nation who serves on their environmental task force. “We want people to see how bad the waters are and to join us in an effort to stop the process of dumping our poisons into the waters, onto to the land, and into the air. We want everyone to realize that they have a moral responsibility to provide good water and clean air to their kids.”

“We hope to inform people about the history of two row wampum, to help the Onondaga’s seek justice, and promote the importance of working together to protect the earth,” said Andy Mager. “I am Jewish, Russian, German, Hungarian. I have been a neighbor of and working with the Onondaga for the past fifteen years, and on issues of peace and justice for the last thirty. In the fall of 2010 we held discussions on how we could raise awareness – how we could lay the groundwork for taking the case to the public. I have always been inspired by the two row wampum, and proposed this reenactment. We hoped people would respond and they have far beyond what we had hoped for.”

“This trip is to honor the two wampum treaty to protect the earth, and to travel together in peace down this river of life,” said Chief Oren Lyons. “We need to take away from the corporate powers that currently are in charge of the direction of this earth and return it to the people where it belongs.”

“There are a lot of people in good spirits here,” said Sid Hill, Faith Keeper of the Haunensaunee. “Rain is rain. It is a good thing. What is needed is a healing of our two peoples. We made an agreement with the Dutch and we have lived by that agreement. We need others to join with us in protecting Mother Earth.”