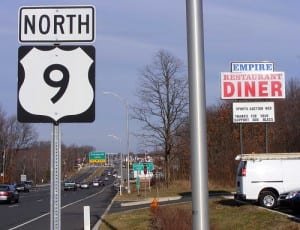 Route 66 is perhaps the most culturally iconic road in American history. Not to take anything away from other byways, but how many have had TV shows and become tourist destinations?

New York has its share of numbered roads with historic connections. In Westchester County where I live there is Route 1 (the Boston Post Road into New England); Route 9 (the Albany Post Road from NYC to Montreal), and Route 22  (the White Plains Post Road to the Canadian Border). These roads follow the lay of the land and have been used for centuries. We should be promoting them as access points to our history community.

In a recent newsletter, Town of Amenia historian Arlene Iuliano wrote about Route 22 as the middle path through Amenia history. She reports that the venerable road is straighter today than it once was when it more closely followed the contours of the land. The old road, perhaps not surprisingly, is called “Old Route 22.”  The road today provides a quicker route but at the expense of the historic sites in the town which are now bypassed.

The Hudson Valley Historic Pathways has now created the “Hoof, Foot, Road, and Rail” pathway along Route 22 in Pawling, Dover Plains, Amenia, and Northeast, the Dutchess County towns along the Oblong that was contentious terrain with Connecticut. Some of this effort grew out the Dutchess County History Conference which I held in 2011, a brown bag luncheon in Pawling, and a meeting with Arlene in Amenia. Valerie LaRobardier of Dover Plains, who attended the Dutchess County History conference, was instrumental in this effort. The group has produced a color-coded map with  four stops in each town. The next step is to create a scheduled program for tour operators or those  wishing to experience Route 22 history.

Transportation is history. I like being on Route 5 and knowing that the King’s Highway, the Erie Canal, the railroad, and the interstate are in walking/swimming distance of each other as all of them cut through the Mohawk Valley.

Here in Westchester we have parkways, the ways through the parks that follow the rivers like the Hutchinson River Parkway, the Saw Mill River Parkway, and the Bronx River Parkway.  My grandfather drove the Bronx River Parkway with my mother when it really was a excursion to the country as a Sunday drive. My father took me to the opening of the New Rochelle exit on the New England Thruway (I-95) when it cut through the middle of the city. Interstates are like that. They are impositions on nature by people as an act of conscious will and woe to the neighborhood or hill that is in the way. The interstates don’t have the historical cachet that the older roads do; they are for getting somewhere fast and easy, with no contact with the local communities. The old routes are part of the fabric of the community.

Wouldn’t they make great paths? How hard could it be to go to a tour operator and say: “Follow this road and stop in every community along the way to experience its story?” Of course, the local communities would have to organize to tell the story in a coordinated way for this to work Isn’t that exactly what Western New York put in its recent economic development proposal?.

So here is yet another challenge:

Let’s create “On the Road Again” paths for the leading roads in New York State.

Let’s have the municipal historian and historical society of each community on the historic roads of New York State create the local experience program.

Let’s then combine these community experiences into a larger experience called a path.