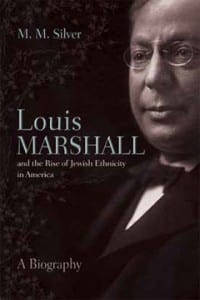 In Louis Marshall and the Rise of Jewish Ethnicity in America: A Biography (Syracuse University Press, 2013) M. M. Silver provides the first scholarly treatment of a the sweeping influence of Louis Marshall’s career through the 1920s. A tireless advocate for and leader of an array of notable American Jewish organizations and institutions, Marshall also spearheaded civil rights campaigns for other ethnic groups, blazing the trail for the NAACP, Native American groups, and environmental protection causes in the early twentieth century.

Until now, no comprehensive biography has been published that does justice to Marshall’s richly diverse life as an impassioned defender of Jewish communal interests and as a prominent attorney who reportedly argued more cases before the Supreme Court than any other attorney of his era.

Through the chronicle of Marshall’s life, Silver sheds light on immigration policies, Jewish organizational and social history, environmental activism, and minority politics during World War I, and he bears witness to the rise of American Jewish ethnicity in pre-Holocaust America.

M. M. Silver is a modern Jewish history scholar at Max Stern College of Emek Yezreel in Israel. He is the author of several books and articles, including Our Exodus: Leon Uris and the Americanization of Israel’s Founding Story.