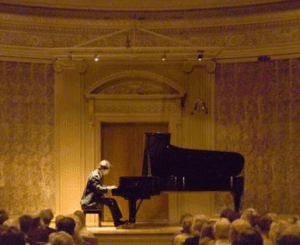 The Frick Collection presents its seventy-fifth anniversary season of classical music concerts in the elegant setting of the museum’s Music Room.

Debuting in 1938, just three years after The Frick Collection opened to the public; the concert series is one of the most celebrated in New York City and has delighted thousands of visitors over the years with world-class performances ranging from solo recitals to chamber music groups to early music ensembles.

The Music Room, built in 1935 as part of the transformation of the private mansion into a museum and the setting for concerts since then, conveys the atmosphere of a private salon, offering performers and attendees a uniquely intimate environment and impressive acoustics. A New York Times critic described the spectacular setting of the Music Room as “probably the best place in New York to hear chamber music.  It is certainly the most authentic; much of the repertory was written to be played in exactly such a room.”

During its distinguished history, the concert program has been recognized for the special niche it fills in the highly competitive and rich world of music performance in New York. The Frick has been host to major soloists and ensembles such as legendary instrumentalists Gregor Piatigorsky, Artur Schnabel, Josef Szigeti, and Wanda Landowska; vocalists Kiri Te Kanawa, Peter Pears, Kathleen Battle, and Elisabeth Söderström; and the Budapest, Amadeus, Tokyo, and Guarneri quartets. In recent years, it has become prestigious for European musicians to make their New York debuts at the Frick, notable examples being Ian Bostridge, Matthias Goerne, Felicity Lott, Pieter Wispelway, Julian Rachlin, Kate Royal, Yevgeny Sudbin, the Jacques Thibaud Trio, the Carmina Quartet, and Fretwork. The Frick has also become an important venue for performances on period instruments such as Jordi Savall with Hespèrion XX, Richard Egarr (harpsichord), Andrew Manze (violin), and the Quatuor Mosaïques.

The Frick concert series also has a long history of reaching audiences far beyond those present for performances. Since 1939 the concerts have been broadcast on the Municipal Broadcasting System, American Public Radio, and WNYC Radio. Currently, concerts can be heard on WQXR/National Public Radio. Recent performances are posted on the station’s Web site for up to two years.   In addition, since 2009, four concerts annually have been broadcast on BBC Radio 3 in the United Kingdom.

Tickets ($35 each, $30 for members) are available online, by mail, or by telephone at 212.547.0715. For complete program information, visit www.frick.org/programs/concerts.