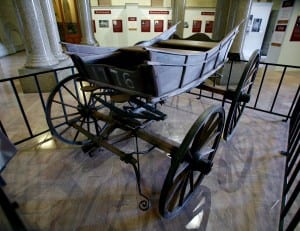 One hundred years ago on July 1, 1913, Votes for Women activists Edna Kearns, Irene Davison, and eight -year-old Serena Kearns left Manhattan from the headquarters of the NYS Woman Suffrage association and headed to Long Island in the horse-drawn wagon called the “Spirit of 1776.” They spent the next month organizing in many communities to gather support for women voting. The wagon and its journey were covered by many New York City and Long Island newspapers.

Four years later in 1917, New York’s women finally won the franchise. This was followed by the vote being extended to millions of American women nationwide in 1920 and the ratification of the 19th Amendment to the U.S. Constitution.

During the closing days of the 2013 session of the New York State Legislature, both houses passed a resolution to honor the centennial of the wagon’s first trip for organizing purposes. July 1, 2013 was designated as “Spirit of 1776” Wagon Day in New York. The resolution describes NYS as the “cradle of the women’s rights movement in the United States” and cites the wagon’s connection to current policies of economic and cultural tourism development, the urgent need for NYS to complete the upstate Women’s Heritage Trail, and the support of historic sites related to the long campaign for women’s suffrage

Deborah L. Hughes, President and CEO of the National Susan B. Anthony Museum and House in Rochester was present at the recent press conference announcing the recognition of Wagon Day. “One speech, one march, one wagon at a time…the women of New York have changed the world for all women,” Hughes said.

It was the hard fought strategic victory in New York in 1917 that turned the tide of American sensibility in favor of women’s rights. The wagon is a rare artifact of the suffrage movement. Only two campaign wagons are known to have survived. One is in the Smithsonian. The other is “Spirit of 1776.” The “Spirit of 1776” wagon, now in the collection of the New York State Museum, was the centerpiece of last year’s “From Seneca Falls to the Supreme Court; New York Women Leading the Way” exhibit in the state Capital building.

Members of the bipartisan NYS Legislative Women’s Caucus sponsored the bill honoring the “Spirit of 1776” wagon centennial. The chairs of tourism committees in both houses, Senator Betty Little (45th Senate District) and Assembly Member Margaret M. Markey (Assembly District 30) attended the public announcement June 19 in the Well of the Legislative Office Building, along with Votes for Women 2020.

Senator Little, chair of the Senate Cultural Affairs, Tourism, Parks and Recreation Committee said, “The ‘Spirit of 1776’ suffrage campaign wagon is a powerful historic symbol reminding us all of the ‘new frontier’ that was traveled and conquered by brave and determined women to whom we owe a tremendous debt of gratitude. Many of the suffragists didn’t live to see the destination – the 19th Amendment to the United States Constitution – but each and every one contributed to ensuring a brighter future not only for women, but for our nation and the world. I’m honored to join my colleagues today in this legislative effort to memorialie the wagon as work progresses on plans for that mission.”

Markey, chair of the Assembly Tourism, Parks, Arts and Sports Development Committee noted: “New York led America in extending the vote to women. It’s an honor for us to mark the centennial of the ‘Spirit of 1776’ wagon and to salute some of the crusading pioneers who helped galvanize the nation to adopt the 19th Amendment to the U.S. Constitution. In the coming years we look forward to establishing a Women’s Heritage Trail to connect the historic sites around the State that show the vital role New York women had in the historic movement.”