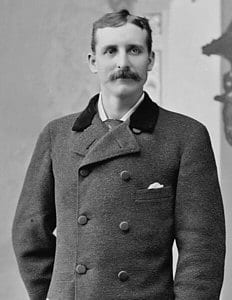 The recent exploits of Nik Wallenda at the Grand Canyon (the video might make you weak in the knees) call to mind a North Country man who once performed daredevil stunts and amazing feats more than a century ago. The most famous effort by Robert Emmet Odlum, a St. Lawrence County native, earned him footnote status in the lore of a famous American landmark.

While Odlum’s origins (he was born August 31, 1851) have been reported as Washington, DC, and Memphis, Tennessee, he was born in St. Lawrence County, New York. That information is in stone, literally―Ogdensburg as his birthplace is carved into the obelisk atop Odlum’s grave. (He was buried in Washington, which may account for some of the confusion.)

Robert’s entire life was linked to water, beginning with the St. Lawrence River, where it is said he learned to swim as a very young child. That information comes from his mother, who wrote Robert’s life story after he died.

The focus here is on Odlum’s greatest claim to fame. As a young man, he realized the value of being able to swim, and the safety angle became his passion. To draw attention to his cause, he began performing stunts―holding his breath underwater for minutes at a time, and issuing challenges to any competitor daring to battle him in swimming races.

What attracted the most media attention were his jumps from various heights, including a number of bridges. Besides increasing his fame, the jumps were used by Odlum to highlight two safety issues affecting the lives of many: his belief that everyone should learn to swim, and that people who found themselves trapped in high-rise fires should confidently jump to the safety of nets held by firemen.

The fire issue was a real national concern. America’s increasingly tall buildings left occupants beyond the rescue capabilities of most fire departments, which were limited by the heights their ladders could reach. The only option for those in the upper reaches of very tall burning buildings was to jump.

Having the nerve to leap from a great height was intimidating enough, but there was also the belief that a person plummeting in such manner would die from the inability to breathe as they fell. It may sound silly now, but in the 1870s, it was a theory that had yet to be tested. Removing that fear would make it easier to jump, and thereby save lives. But how to prove it without risking death?

Odlum had already begun the process, dropping safely from increasingly high perches. In 1880, he plunged 100 feet into the Potomac without injury. At other venues he performed similar feats, striking the water feet-first and suffering no apparent ill effects.

At this same time, Robert founded the Natatorium, or swimming school, in Washington, DC. Though there is no evidence that he actually schooled on the subject, he became known as Professor Odlum (in the federal census, his occupation is listed as Professor of Swimming).

The city’s elite regularly attended the Natatorium. Among his students were the children of presidents, senators, and military men. The First Lady, Mrs. Garfield, attended the season opening in 1881. It was all great publicity, but Odlum still continued with his jumping and swimming exhibitions. 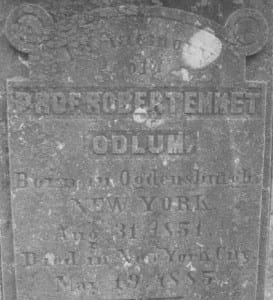 His fame on the Potomac grew in connection to various stunts, once holding his breath underwater for 3 minutes and 10 seconds, and jumping from the wooden bridge at Occoquan Falls, a drop of 90 feet. It didn’t escape his notice that in 1885, the most prominent object from which to jump was the Brooklyn Bridge, which had opened two years earlier and captured the nation’s attention.

Word soon spread that Robert planned to make the first jump from the world’s most famous span and drop more than 130 feet into the East River. His previous highest jump was said to be 110 feet.

Just prior to the attempt, Odlum was quoted from an interview with the New York Herald: “If I should die, I don’t want the public to think that I had no good object in view. I want the Herald to explain that I have for years illustrated the fact that men do not die while falling through the air, and that, no matter if men or women were 100 feet high on the roof of a burning building, they would not hesitate to jump into a net if they read that I had jumped 140 feet from the Brooklyn bridge.”

New York City authorities had no intention of allowing Odlum to jump. On the day of the event, thousands of spectators swarmed the area, but a heavy police presence was evident. Every cab (horse-drawn … remember, it was the 1880s) entering the bridge area was shadowed by an officer on foot.

After a couple of hours, a strong suspect was found. Questioning began as the cab slowed. The occupant explained that he wanted to jump and saw no reason for anyone to interfere. Additional officers moved in and surrounded the vehicle as it crept along. Their orders were to prevent the jump, and Odlum was not allowed to exit the vehicle.

Except that it wasn’t Odlum. About two hundred yards behind the cab was a wagon, quietly making its way across the bridge. When it stopped, out stepped Robert Odlum. After a few moments of preparation and proper positioning on the bridge railing, he was ready to jump. The police, realizing a ruse had been perpetrated upon them, moved in his direction.

But they were too far away, and there was no hope of stopping him. Thousands of onlookers (plus reporters and recovery crew in boats below the bridge) suddenly went silent as Robert raised one hand high above his head for use as a rudder while in flight. And then he stepped off, dropping to the water’s surface in a little more than three seconds.

The fall was controlled for the first 100 feet, but then he began to slant. It was not known if the wind caused Robert’s body to move, or if perhaps he felt rushed by the presence of officers assigned to prevent the jump. Corrective maneuvers were taken, but it wasn’t enough. He struck at an angle, partially impacting his right hip area. Water blasted skyward for 20 feet or more as he disappeared beneath the surface. After several tense moments, he surfaced, but floated face down. Something was wrong. 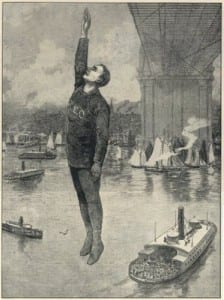 The assigned rescue swimmer appeared to panic, and Odlum’s partner, Captain Paul Boyton, sprang into action, diving immediately into the river and swimming swiftly to his friend. Using his shoulder to elevate Robert’s head above the water, Boyton retraced his path. Thousands watched as they approached the rescue boat and Odlum’s limp form was hoisted aboard.

He remained unconscious for a while, but then showed signs of life. Opening his eyes, Odlum asked if he had made a good jump. He was assured by many that he had done a fine job, but moments later, as he tried to sit up, brightly colored blood oozed from his mouth. More soon followed, and though his supporters expressed confidence that he would recover, Robert was in serious trouble.

The boat headed for shore, finally reaching land 35 minutes after the jump. An ambulance was then summoned, arriving twenty minutes later. But by the time they reached him, Odlum had expired.

In all likelihood, there was little anyone could have done to help. An autopsy later revealed the extent of his injuries: ruptured kidneys, liver, and spleen, plus many severe bruises and several broken ribs.

In the aftermath, controversy raged surrounding blame for his death. Some were vilified and many were criticized, but Odlum himself was not included. He was characterized as a kind, brave, and caring man, and the deadly jump was acknowledged as at least partly altruistic in nature (seeking undeniable proof that dropping from a great height could not alone cause death).

That much was true, for Odlum had died, but from injuries suffered during a botched landing―not from the long fall. History tends to encapsulate lives and events, and so it is with Robert Emmet Odlum, an accomplished citizen who is best remembered as the first man to jump from the Brooklyn Bridge.