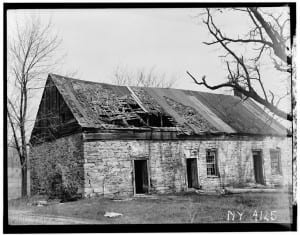 My previous post about Weigand’s Tavern was written about an historic structure, one of the oldest in Newburgh, which was in peril. Sadly, it is but one instance of many; there are too many cases in other parts of Ulster and Orange counties.

Another example is the Johannes G. Hardenbergh house, which was introduced to me by a fellow firefighter who explored its remains as a young child. This post will be about what happens when a local community does not, or can not, move fast enough to save a piece of history in time.

All that is left of the Johannes G. Hardenbergh house is a blue and yellow State Education Department historic sign near the intersections of Routes 209 and 44/55 in Kerhonkson, Ulster County, proclaiming that the structure was a site of significance during the American Revolution. The home was important for two reasons. First, it belonged to a leading member of a once powerful Hudson Valley family, the Hardenberghs. Major Johannes Hardenbergh purchased over two million acres from the Esopus Indians. The land grant encompassed the modern counties of Sullivan, Ulster, and Delaware, or most of the Catskill Mountains. The second reason, and the subject of this article, is the role that this house played in the American War for Independence.

In October of 1777, a plan was underway by the British to launch an invasion of the Hudson Valley. If their plan played out, they hoped that it would allow them to take full control of the Hudson River. An attack was launched from the West, North, and South. Once control of the Hudson River was assured, New England could be isolated by splitting the colonies in half; hence, communication and supplies between the colonies would be severed. The British Army, marching from the West, was stopped at Oriskany; the Northern Army halted at Saratoga. However, a flotilla coming up from New York City inflicted heavy damage on the Hudson Valley, destroying Forts Clinton and Montgomery and the first chain-and-boom across the Hudson River.

Believing that an attack on the capital of Kingston was imminent, Governor George Clinton decided that the records held there needed safe-keeping. Some ten wagons were loaded with the government’s most important papers and were to be moved inland. Their ultimate destination was the Johannes G. Hardenbergh house. Kerhonkson, which was considered the frontier in 1777, was considered inland enough to avoid the British threat. Johannes G. Hardenbergh, Comfort Sands, and Hendricus Horrnbeek were placed in charge of the valuable archives.

In October 1777, the New York State Government and the residents of Kingston, were forced to flee in advance of General Vaughn’s expedition up the Hudson River. On October 12, the records arrived at the Hardenbergh House. On October 16, 1777, the British put Kingston to the torch.

After the war, Hardenbergh continued to reside in his house with his wife and children until his death in 1812. Less than a century after he perished, comments were being made regarding his house’s disrepair. Charles Gilbert Hines, who wrote a book about the Old Mine Road which is today Route 209, noted as early as 1908 that the home was showing signs of decay. Three years later, in 1911, Herman Kortright owned the Hardenbergh house. 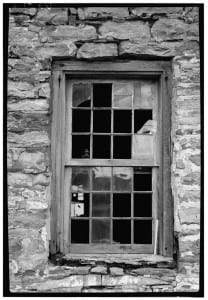 Some in the community called for the home to be preserved as a site where General Washington visited, as well as a site of significance during the Revolutionary War. A meeting was held at the Hardenbergh house on September 5, 1922, which included a presentation by Thomas E. Benedict, on plans to preserve the home. It was hoped that the Hardenbergh House, then owned by Charles Osborne, would become an historic site and a park could be created from the grounds. Osborne had agreed to Benedict’s plan for the home, which he was then using for farm storage.

While preservationists deliberated however, the home continued to decline. Helen Wilkinson Reynolds, in her book Dutch Houses in the Hudson Valley before 1776, also commented on the poor condition of the house.

During 1933, attempts were made to document the significance of the home both historically and architecturally by the Federal Government’s Historic American Buildings Survey (HABS). The recorder of the state of the house noted that the home was built around 1750 and was “one story large basement and large loft.” It had “fine paneled rooms and one of the best examples still standing of this type in Ulster County.” By that time however, the roof was already starting to fail.

Shortly after the HABS documentation, parts of the home were dismantled. The parlor, bedroom, and the kitchen were shipped to the Winterthur Museum in Delaware. Once there, the museum reassembled it as an outstanding example of an 18th century Dutch home. By 1940, though, the actual Johannes G. Hardenbergh house was no longer standing.

Today there is little left of the home, other than a sign which serves as a testament to its importance.  Even the graves of Hardenbergh and his wife, which once occupied the “summit” of Turkey Hill, have long since been removed and relocated to the Old Dutch Reformed Church graveyard in Kingston.

The closest his property ever came to becoming a park was an old baseball field which has also disappeared. There is not much else at this location anymore, other than the remnants of a foundation which is overgrown by weeds.