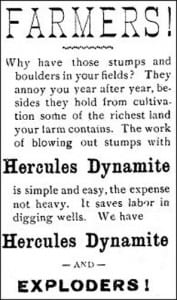 I enjoy all kinds of stories, and true “Oops!” moments are among them. Like the time my dad, always a do-it-yourselfer (and a good one), was working on the house, and with hammer in hand, instinctively tried to shoo away a nuisance bee buzzing around his head. The result? Let’s just say an empty hand would have worked much better. Or when a friend of mine, a nice guy who didn’t always think things through, made the surprise announcement that he had bought a jeep from a buddy. I knew he couldn’t afford it, but he loved the open-air concept of the Wrangler.

As it turned out, during the tryout phase, he decided to cut some old trees for firewood, and yes, he managed to drop a tree on the jeep. You break it, you bought it.

I’ve collected a few North Country Oops! stories over the years. Here are some involving dynamite, leaving behind few injuries but plenty of red faces.

In 1911, during construction of the Morristown Road in St. Lawrence County, workmen accidentally disrupted Ogdensburg’s city-wide phone service, which was handled by eighteen pairs of wires. As the unexpected consequence of a blast, only one pair of wires remained intact.

Dynamite was a tool of the trade for construction workers and farmers (stump removal was a common usage). After a day’s work in February 1923, Patrick Dalton and Harley Plumley of Hampton (near Whitehall) tossed some newspapers into the stove to build a fire. Moments later, Dalton had a compound leg fracture and Plumley was badly cut, courtesy of shrapnel from the shattered stove. They had forgotten that the newspapers contained dynamite.

In 1929, a Canton motorist was halted by a workman who suddenly realized that danger was at hand. While excavating to install a gas tank, solid rock had been encountered, and dynamite was the routine method of removal. Apparently it was not so routine to notify the public.

As the car stopped before his raised hand, an explosion sent debris flying skyward. Dirt and stones rained down on the vehicle, punctuated by the resounding crash of a large rock planting itself in the car’s hood. The company agreed to pay for repairs.

In 1929, another North Country road gang was embarrassed, but to a far greater extent than the Morristown crew. Work was being done on the Pok-O-Moonshine Road in Essex County, the main connector between Montreal and New York City. The lines of communications, owned by AT&T, followed the same path as the highway. An errant dynamite blast disabled the entire system from Quebec to the Big Apple.

One of the region’s largest explosions occurred in Lyon Mountain in late 1883 (reported in one of my earlier books, Lyon Mountain: The Tragedy of a Mining Town). Even at that early stage, the iron mines used more than 300 pounds of dynamite per day. For safety, it was kept frozen. Each day, a new supply was thawed in the powderhouse and prepared for use.

On that particular morning, catastrophe struck when the bottom of the stove fell out and live embers scattered around the room, igniting some fuses. The attendant, realizing an explosion was imminent, managed to run outside, where he was thrown to the ground by the tremendous concussion that followed.

As described in local newspapers, it “shook the whole mountainside, swaying the houses to and fro, throwing open doors, rattling dishes, and producing all the other effects of a first-class earthquake. At Upper Chateaugay Lake, four miles distant, the effect was equally great, dishes being actually shaken from the shelves in some of the residences.”

Near the (former) powderhouse, there was heavy damage to the huge train trestle, rail cars, several buildings, and mining equipment. Dozens of windows were blown out as well.  The ignition of 350 pounds of dynamite had scattered heavy debris for a great distance and left nothing but a crater where the building once stood. Incredibly, none of the men working nearby were injured.

Photo: 1899 Advertisement for dynamite in the Plattsburgh Sentinel.