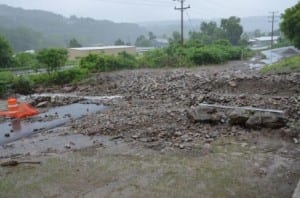 Just as the eastern section of the Erie Canal was set to reopen from previously flooding closures, heavy rain fell onto already saturated ground late Thursday night and into Friday, causing creeks to rage out of their banks throughout the Mohawk Valley.

The torrent flooded several canal communities from Little Falls to Fort Plain, leaving a path of destruction, closing an Eastern portion of the Canal and some sections of the Erie Canalway Trail, and halted the replica canal boat Lois McClure.

On Friday, Gov. Andrew Cuomo declared Chenango, Herkimer, Madison and Oneida counties disaster areas. Among the hardest hit canal communities was Fort Plain, where one resident died and many homes and businesses were destroyed. Portions of the Erie Canalway Trail were also impacted. Closure of the NYS Canal System from Lock 2 in Waterford through Lock 22 in New London has halted travel for many boats – including the Lois McClure. The scheduled journey of the 1862 replica canal schooner is on hold until the canal reopens. The vessel is currently docked near Schenectady, but has been unable to move further west.

A small creek carried a rock off the hillside, burying a segment of the Canalway Trail near Little Falls. Portions of the trail between Rome and Canajoharie were closed while damage was assessed. In other areas, canal waters overflowed and trees and debris choked shorelines and locks. The Erie Canalway Heritage Area has put up a photo slideshow of the flooding.

The NYS Canal Corp is currently assessing damage and cleaning up affected locks and structures. Crews are working around the clock to monitor conditions and prepare the canal for reopening. Consult their Notice to Mariners webpage for updates on canal conditions. Most museums, historic sites, and tours were unaffected and remain open.

The 15th annual Cycling the Erie Canal bike tour from Buffalo to Albany begins this Sunday, July 7th in Buffalo. More than 500 cyclists of all ages will set off on the Canalway Trail for the 400-mile, eight-day journey.

Photo: A segment of the Canalway Trail near Little Falls. Photo by Duncan Hay, courtesy the National Park Service.