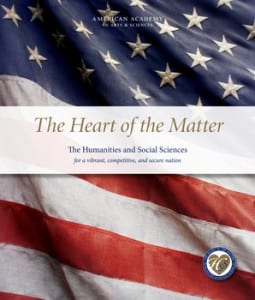 Readers of the New York History blog may be interested in a new report by the American Academy of Arts and Sciences, “The Heart of the Matter: The Humanities and Social Sciences for a Vibrant, Competitive and Secure Nation”.  It explores the need for more support for the humanities and social sciences, particularly in education.

“The humanities remind us where we have been and help us envision where we are going,” says the report. “Emphasizing critical perspective and imaginative response, the humanities – including the study of languages, literature, history, film, civics, philosophy, religion and the arts – foster creativity, appreciation of our commonalities and our differences, and knowledge of all times. The social sciences reveal patterns in our lives, over time and in the present moment.”

Some of the examples are rooted in history.

There is also a very well done companion film on the report’s website featuring a number of prominent Americans, ranging from actor John Lithgow to former Supreme Court justice Sandra Day O’Connor, advocating, among other things, the need to study the humanities and to boost civics in the schools. Historical film maker Ken Burns notes the weakness of study of history in the schools, asserting that many young people graduate from high school so poorly informed about World War II that they believe the Americans fought with the Germans against the Russians.

The report advances three broad recommendations: educate Americans in the knowledge, skills, and understanding they will need to thrive in the 21st century; foster a society that is innovative, competitive, and strong; and equip the nation for leadership in an interconnected world. There are more specific action items under each heading.

The report is strong and interesting but teasing out specific history issues is a challenge because of its broad scope. In the film, humanities are defined as “branches of knowledge that investigate human beings, their culture, and their self-expression” and social sciences as “the branch of science that deals with institutions and the functioning of human society.” That makes history a sub-part of something very broad and complex.

Reports of this sort are often broad in scope. The Social Sciences and Humanities Research Council of Canada’s “Strengthening Canada’s Cultures of Innovation: Strategic Plan, 2013-2016” [PDF], has very broad definitions of both the social sciences and humanities. “The challenges of the 21st century require the independent thinking about and creative inquiry into the complexities of human thought and behavior that are the hallmarks of humanities and social sciences research,” notes the Council. It supports “research and talent that are central to quality of life and innovation…research [that] enhances our collective understanding of social, cultural, technological, environmental issues.”

New York State is part of the multi-state “Cultural Data Project” which gathers data on cultural programs. These programs, according to the project’s web site, “represent virtually every facet of the arts and cultural sector, including dance, music, history, traditional and folk art, museums, zoos, arboreta, aquariums and much more.”

Last year, the New York City Community Trust, New York City Department of Cultural Affairs, and New York State Council on the Arts established the Arts & Culture Research Fund to provide funding for research using this data. In May of this year, the New York Council for the Humanities made a series of grants in connection with this initiative, including one to Arts Services of Western New York in Buffalo to map and report on the arts and culture in Western New York and another to the SUNY New Paltz Center for Research, Regional Education and Outreach to measure the impact of arts and culture in seven counties in the Mid-Hudson valley. History will be included but the definition of “cultural” entities is very broad.

History is arguably part of the humanities and arguably part of the social sciences. It is related to civics education and the arts. Reports and initiatives like the ones noted above raise the profile of these fields and make the public case for their importance. The reports often garner media attention and may lead to development of new policies that affect the flow of revenue.

But the fields they cover are very broadly defined, and programs other than history are likely to receive the most attention. This is another reason that New York’s history community needs to find ways to explain and highlight its own distinct mission and resource needs.