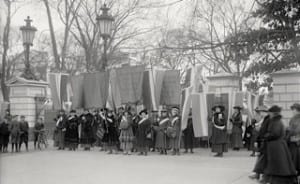 Olympia Brown made U.S. history in the North Country 150 years ago, early this summer. She became the first woman to become a fully ordained minister with a degree from a regularly established theological school. Olympia was ordained in the Universalist Church of Malone by the St. Lawrence Association of Universalists on June 25, 1863 and graduated from the St. Lawrence University Theological School in Canton two weeks later, on July 9, 1863.

Throughout the remainder of her 91-year-old life, she was an outspoken Universalist preacher and a fearless campaigner for suffrage and equal rights for women. Olympia marched, lectured, testified, published, protested and picketed a myriad of times from coast to coast. 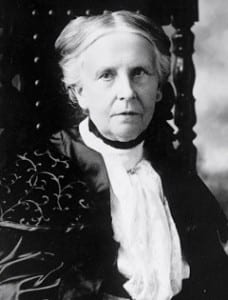 Weighing in at barely 90 pounds, she was a courageous woman of action. When Olympia was campaigning for universal suffrage in Kansas after the Civil War, she faced down a howling mob of men who threw rocks and debris at the schoolhouse where she was speaking. A year later during a meeting of the American Equal Rights Association at Cooper Union in New York City, the diminutive preacher got into a heated dispute with the six-foot tall black civil rights leader Frederick Douglass, when he argued that black men should get the vote before women.

Year after year, decade after decade, Olympia attacked what she called the American “aristocracy of sex,” never forgetting her mantra, “Let the chips fall where they may!” When she was in her eighties, she braved gangs of hooting and jeering men to picket the White House and burn President Woodrow Wilson’s speeches on democracy and freedom to protest the president’s failure to back a woman’s suffrage amendment to the U.S. Constitution.

After the voting rights amendment was added to the Constitution in 1920, Olympia was quick to demand that Congress next propose an equal rights amendment. She could foresee that woman’s suffrage, in and of itself, would not grant women equal rights, nor would it prevent Congress from passing laws to take previously-won rights away from women.

Because Olympia was so outspoken and uncompromising, some activists within the women’s movement criticized her. The leaders of the National American Woman Suffrage Association, Carrie Chapman Catt and Anna Howard Shaw, condemned women like Olympia who marched and picketed in Washington, D.C. as “disgusting and reprehensible.” Olympia’s own state women’s organization in Wisconsin agreed with Catt and Howard and shunned Olympia for years, describing her activity as “improper.” Olympia answered her critics by stating that women had been dignified and proper for over 60 years and “we still do not have the vote.”

Celebration of the sesquicentennial of Olympia’s historic achievements is not without historical controversy. On the basis of a report in a 1860 newspaper, some historians believe that Lydia Ann Jenkins may have been ordained several years before Olympia by the Ontario Association of Universalists in Geneva. However, official records documenting Lydia’s ordination have not been found. In any case, unlike Olympia, Lydia did not graduate from a recognized theological school.

For many New Yorkers, the struggle to stamp out the American “aristocracy of sex” goes on. In Albany, debate rages about passage of new legislation to protect and expand women’s rights by making state law agree with federal protections. As battle lines harden about these proposals, words originally written on a bronze tablet installed by St. Lawrence University to honor the centennial of Olympia’s graduation and ordination continue to have meaning today, fifty years later. The last few lines on the plaque declare, “Preacher of Universalism, Pioneer and Champion of Women’s Citizenship Rights, Forerunner of the New Era, ‘The Flame Of Her Spirit Still Burns Today.’”

Photos: Above, women picketing the White House in 1917; and below, a portrait of Olympia Brown (courtesy Library of Congress).