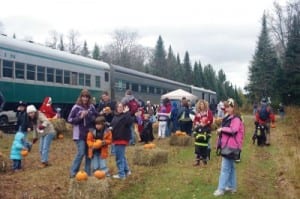 What follows is a press release issued by Bethan Maher, Executive Officer of the Adirondack Railway Preservation Society.

The New York State Department of Transportation (DOT) and Department of Environmental Conservation (DEC) announced on June 6th that the State will initiate a public process to review the Unit Management Plan for the Remsen-Lake Placid Travel Corridor, part of the 141 miles of track on which the Adirondack Scenic Railroad operates.  Although the Railroad does not feel that revisiting the UMP is necessary in determining the future of the rail corridor, the Railroad remains confident that the State will once again determine the best use of this public asset is to maintain its designation as a multi-use corridor with a completed rail line and blended recreational and trail opportunities along the completed line.

For the past twenty years, the Adirondack Railway Preservation Society (ARPS, DBA: Adirondack Scenic Railroad) has enjoyed success as an important heritage tourism attraction as well as safe and successful rail operations. The railroad has served in excess of 1.2 million passengers and grosses $1,000,000 in annual ticket sales, facts which are reported to several federal agencies. As a multimodal corridor (rails with trails), rail use also allows for interface between the train, hikers, bikers and canoeists, making New York State a leader and world class example in this concept traversing a sensitive ecosystem.

The ARPS looks forward to working together with Commissioner Joe Martens (DEC) and Commissioner Joan McDonald (DOT) to study the impact of a completed rail connection between Utica and Lake Placid, an attractive option for individual travelers and for group tourism.  A completed rail line allows the Adirondack Scenic Railroad to carry riders on shorter excursions to communities and attractions along the entire corridor. The Railroad’s southern terminus in Utica connects to national rail and bus services, linking many otherwise isolated communities to larger metropolitan areas such as New York City, Boston, Chicago, and beyond.

The future of the Adirondack region depends on bringing people and business to the area from outside the Park and we cannot afford to eliminate any infrastructure which serves to attract tourists here. The Adirondack Park has thousands of miles of hiking, biking and snowmobile trails, many of which will be accessible via train with a completed rail line. The Adirondack Park has one railroad, a piece of living and functioning utilitarian history, a protected historic landmark, which allows people of all walks of life to experience the beauty and thrill of the region.

The Adirondack Scenic Railroad will continue to play a vital role in the tourism industry of the region. Destroying our past and limiting our future is not in the best interest of the region. Upon further examination of the corridor, the Railroad believes that its owner, New York State, will make a determination to complete rail restoration as they had planned to do twenty years ago.

Readers can read more about the plan to tear-up the Adirondack Railroad corridor (formerly the New York Central line) through the Adirondacks for a bicycle trail here.