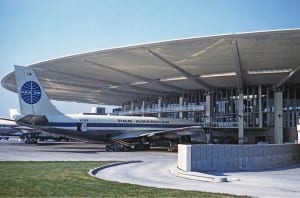 Today, the National Trust for Historic Preservation named the Worldport Terminal at JFK Airport to its 2013 list of America’s 11 Most Endangered Historic Places.

This annual list spotlights important examples of the nation’s architectural, cultural and natural heritage that are at risk of destruction or irreparable damage.

Opened in 1960, Worldport Terminal at JFK Airport, known for its flying-saucer shape, symbolizes America’s entry into the Jet Age and has been featured in several Hollywood films. The first commercial flights of the Boeing 707, the first “modern” jetliner, departed from the Terminal. In May 2013, Delta Airlines ceased operations from the Worldport Terminal, since renamed Terminal Three. Delta and the Port Authority of New York/New Jersey plan to demolish the iconic structure.

Alternatives to demolishing the Worldport include demolishing the south concourse instead and using Worldport as a connecting facility between Terminals Two and Four, as a dedicated or premier terminal or as an independent building open to the public containing a museum, restaurants, shops, aircraft observation space, airport employee daycare or other purposes.

“The distinctive flying-saucer shaped Worldport is one of the most recognizable places in the U.S. and represents an important chapter in aviation history,” said Stephanie Meeks, president of the National Trust for Historic Preservation. “We applaud the efforts of Save the Worldport preservation group and other local advocates who are working to ensure that this historic building can be used in the future.”

The 2013 list of America’s 11 Most Endangered Historic Places (in alphabetical order):

Astrodome – Houston, Texas. As the world’s first domed indoor, air conditioned stadium, the 18-story multi-purpose Houston Astrodome was once dubbed the “Eighth Wonder of the World” but now needs a  viable reuse plan to avoid demolition.

Historic Rural Schoolhouses of Montana – Statewide. Montana boasts more historic one- and two-room schoolhouses still in use than any other state, but these schools are at risk as the state’s population shifts to urban centers

James River – James City County, Va. Jamestown, America’s first permanent English settlement, was founded along the banks of the James River in 1607. The river and landscape are threatened by a proposed transmission line project that would compromise the scenic integrity of this historic area.

Kake Cannery – Kake, Alaska. Kake Cannery played a key role in the development of the Alaskan salmon-canning industry during the first half of the 20th century, but immediate action is needed to stabilize the structural systems of the existing buildings.

San Jose Church – Old San Juan, Puerto Rico. Built in 1532, San Jose Church is one of the few remaining Spanish Gothic architecture structures in the Western Hemisphere. Closed for 13 years, it is threatened by deterioration and structural damage

Village of Mariemont – Cincinnati, Ohio. The Village of Mariemont has been an inspiration for a generation of planners, but it is now threatened by a proposed transportation project, which would permanently scar the careful designs that make this place so unique.

Members of the public are invited to learn more about what they can do to support these 11 historic places and hundreds of other endangered sites at www.PreservationNation.org/places. Also, the public is invited to sign the Save the Worldport petition: https://www.change.org/en-AU/petitions/save-the-pan-am-delta-terminal-3-at-jfk-airport

Photos: Above, Pan American Boeing 707 at the Worldport in 1961 (courtesy Wikimedia user Jon Proctor; below, the original configuration of the Pan Am Worldport at JFK airport, now Terminal 3 (Gottscho-Schleisner, Inc., photographer; Library of Congress print).